We were happy to leave Pikalevo after a good rest. Sun was covered by clouds, but it was still warmer than earlier. Landscapes were changing between ice covered lakes, leafless trees and burned fields. There wasn’t traffic as much as we were used to see. We only saw a few small muddy trails before Sazonovo village.

In Sazonovo we asked water and soon we were sitting in the kitchen, having cups of tea. We continued to explore the village. After visiting in church by the river we asked more water from three women who were carrying firewoods behind a fence. We had confused discussion in Russian. We didn’t manage to get water from them, but we found a well just next to us. We took the water and rode to forest for a night.

I woke up at the night when it was raining. It was too cold for sleeping so I had to spend last hours before sunrise around the campfire. Day was windy, but warm. We were happy to find a shop from village after riding 50 kilometers. Local kids surrounded us. They were surprised to see two tourists in their home village. 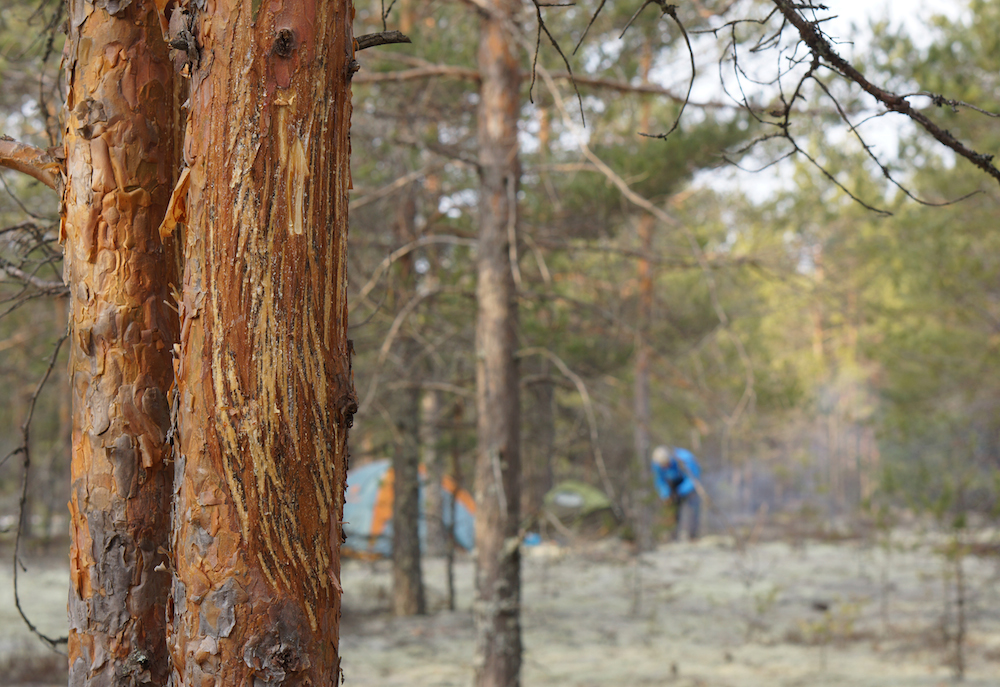 Perfect road for cycling turned to bad concrete road. We bought all six bananas from little market and build up our tents into pristine forest. While picking up firewoods in the light of our head lamps we noticed footsteps of big paws. Some of the pines were scraped. In the morning it was a pleasure to wake up and see neither of us ended up for bears’ dinner during the night. 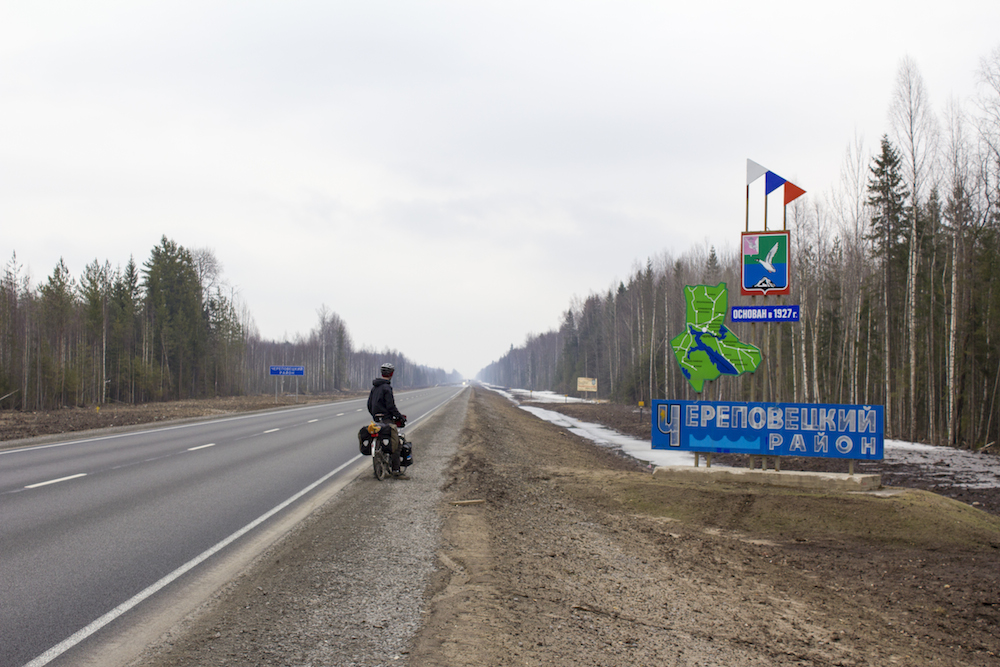 After forest nights we looked forward to see supermarkets of Cherepovets. Western part of city had a huge industrial area with numbers of chimneys pushing gray smoke to the dark sky. We were lucky, the wind was from south, so there wasn’t any smoke in the center of the city. Our contact, Max send us a message and told he was waiting for us in the center square. We asked a way to the center square from random woman on the street. First she asked if we were from Finland. When we agreed, she told us she was Helen, Max’s partner. We went to their house.

Our plan was to stay one day in Cherepovets, but we were there five night, because Lauri got food poisoning and our host Max asked us to join for cycling parade. Max was a funny sight after attaching stereos and scarecrow on his bike. People were also interested in our trip. After giving interviews for television and local newspaper we headed to south. Four local cyclists followed us 20 kilometers.

It was easy to stay on the right way. Road in the countryside followed east coast of artificial Rybinskaye lake. We saw a little grassfire next to the road and started to extinguish the fire with water bottles and by walking on it. We did our best, but the fire was too large for us. Old man Vova came from his house with his grandchild Igor. Together we put out the fire. Vova was impressed for our attitude and he invited us for a dinner to his house. His wife Irina gave us borscht soup, rise and meat. Vova offered us some vodka. Before we left the house, those great people gave us a heavy sack of potatoes, cucumbers and strawberry jam. 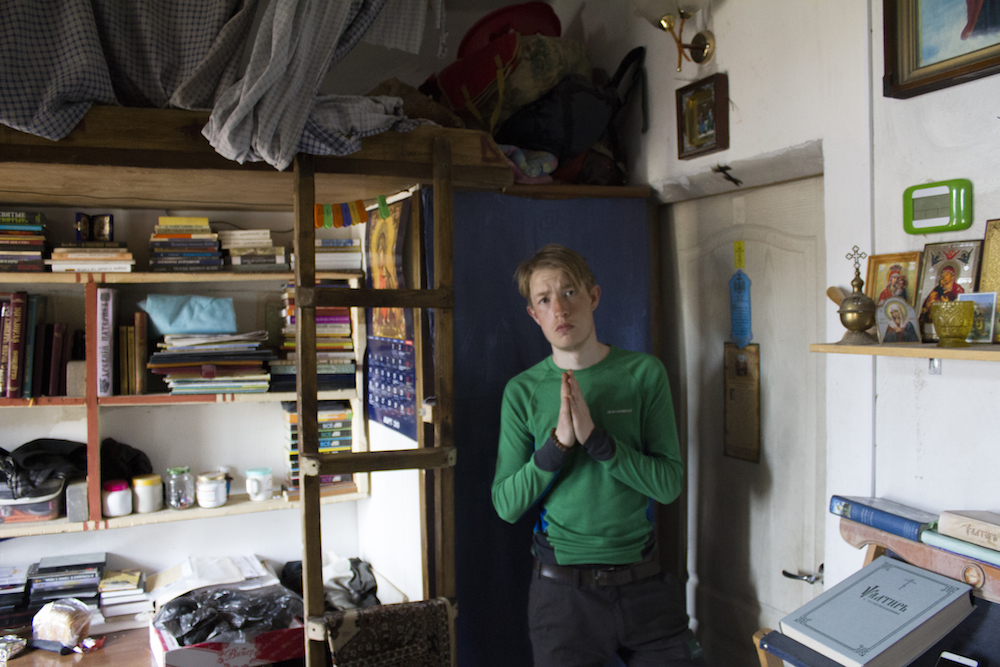 Ground around the artificial lake was very wet. Hundreds of frogs jumped on roads. It was impossible to find dry place for camping. We found idyllic monastery of ten monks and asked if we could stay one night there. One of the monks gave us a room and showed us their cows and chickens. Half past five in the morning monks woke up and went to the church to pray for three hours. Me and Lauri, we needed those hours for sleeping. 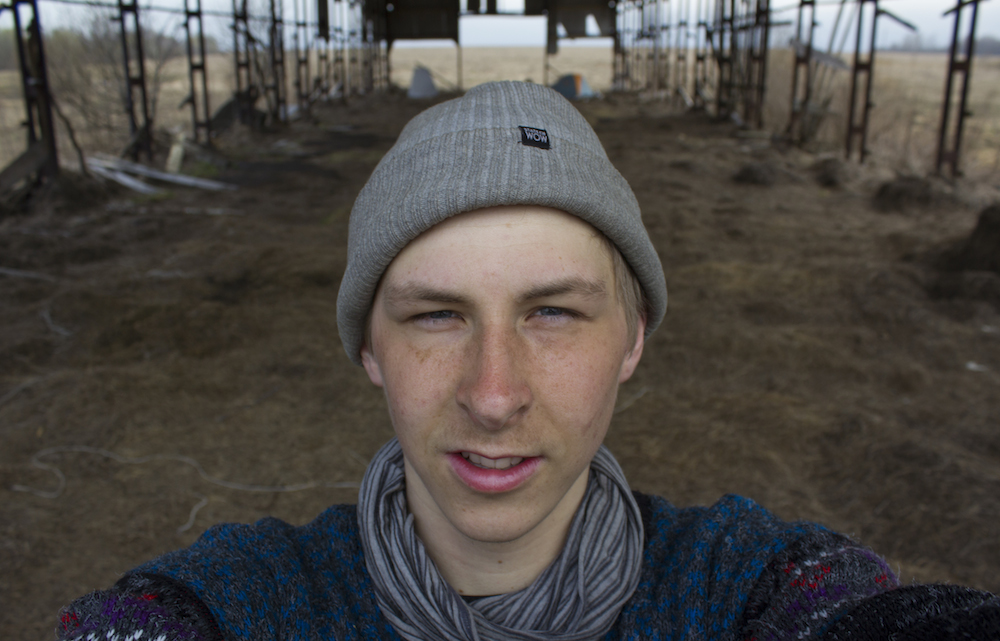 Road got even more peaceful. Chickens were not in cages anymore, they freely walked next to the village road. We arrived to city Yaroslavl after spending one night next to the school and another in old barn. Hospitable teacher Anton took us to his home.