In Lyskovo, we joined to M7 road. There was more trucks than cars on the road. Near Cheboksary, we were lucky. Truck’s tire exploded just 100 meters ahead of us. We stopped to grocery shop in little Emetkino village to buy some dinner. Little boys followed us to the field and helped us to set up our tents. I started my stretching routines. The boys wanted to stretch as well.

We communicated with my phone’s translator. They told us, their English teacher was coming to meet us. After a while the English teacher Tatjana arrived to the field. She removed the brooch from her sweater and gave it to us with a stack of postcards. She wanted to show us their new library, so we walked through the village with the boys and Tatjana. She showed us her sheep who were eating hay next to the village road. Tatjana told us, we were first tourists in their village. That’s why people were so excited of us. After library tour Tatjana invited us to their school for next day and she gave us a bag of boiled eggs and cucumbers.

Our school day started 10 o’clock. Friendly geography teacher Nina introduced us school’s own garden plot. The garden was productive enough to feed teachers and all of the 90 pupils every day. They sold the surplus and bought some bread with the money. Teachers and pupils gathered to the IT class to listen when we told about our trip and Finland. Some of the teachers had traveled abroad, but few of the pupils had visited even Moscow. During the summer pupils take care of their animals and build new houses to the village. We had a delicious lunch in the school cafeteria. Teachers supported our trip by giving us a considerable amount of rubles. Tatjana suggested us to go to the beautiful Crimea, but warned us about Ukraine.

The geography teacher Nina lived in beautiful house with her cows, chickens and sheep. She let us have a bath in her sauna. As Finns, we really appreciated warm steam of her sauna. After the bath we had a huge traditional Russian dinner with Nina and Tatjana. In the evening, we had a long walk with Nina’s grandchildren. 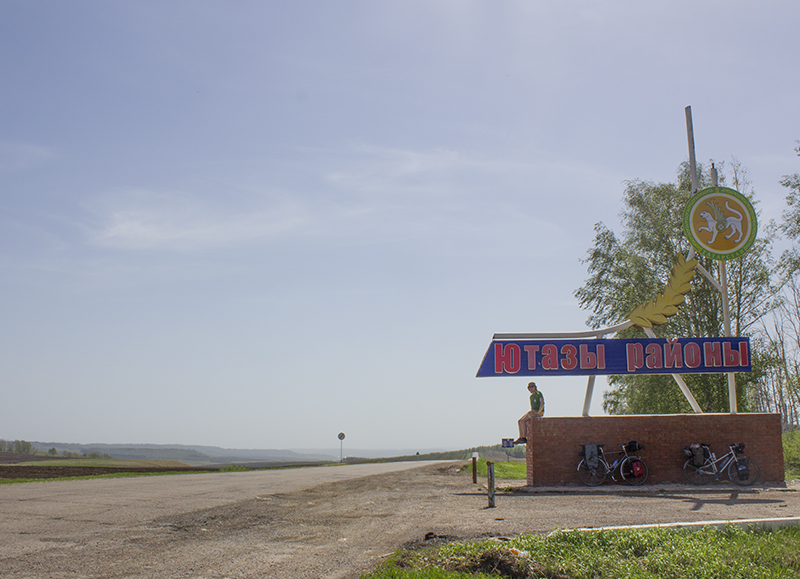 After a good rest we continued to Kazan. Our route followed Volga river from Jaroslavl to Kazan. Before Kazan we crossed the river fourth time. This time the ferry trip was free for us, because an old man offered it for us. He also gave us a chili spray as a gift. Kazan was one of the most beautiful cities we have seen in Russia. We stayed two nights with rap artist, Maxim whose mother we met in Emetkino.

Maxim and his friends taught us how to survive in Russian cities. They all were carrying knives on the streets in case of police or other troublemaker. So far we haven’t had any problems in Russia. People we have met, they have given us money, food and other gifts. Shopkeepers have offered us tea. Some people are afraid of us, but when we introduce ourselves, they usually become curious about us. Quite many people think, our homeland, Finland is part of USA. After Kazan we have seen as many mosques as churches. Some people speak Arabic and Tatar along with Russian. 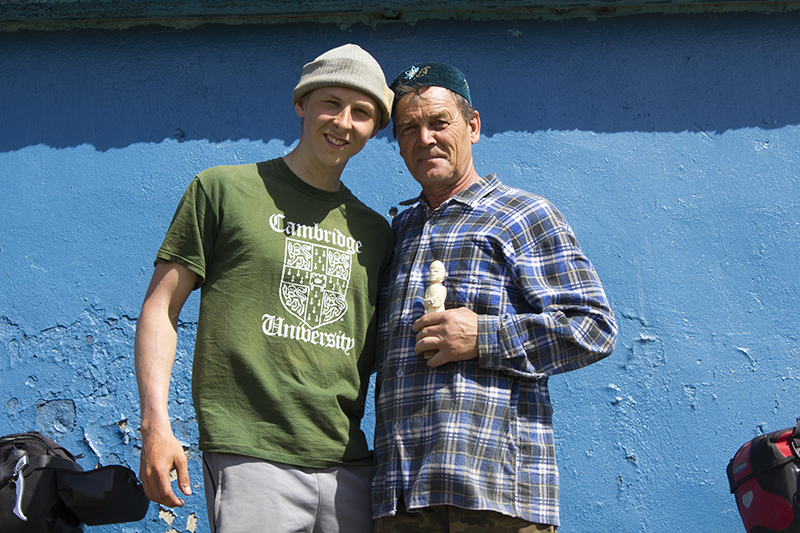 I walked to little muslim village to ask water. Villagers locked their cars and gates when they saw me. This man, Islam wasn’t afraid of me. He gave me water and put some money into my pocket. I gave him the wooden guy I made.

We cycled couple of days in headwind. The temperature was +30C for one week. We had a rest day by the stream. At the midnight temperature decreased to +20C and the wind calmed down. It was time to go back to the road. We passed tens of oil pumps and two oil refineries until we arrived to the empty streets of Almatyevsk. The town was sleeping. There was only a few stray dogs with us. On the edge of the Almatyevsk three crazy dogs started to chase us. The dogs ran on both sides of the road ahead of us until they reached a perfect position to attack. Lauri was holding the chili spray on his hand, while I mentally prepared to defend ourselves. We cycled two kilometers in adrenaline rush and finally the dogs gave up.

During seven weeks in Russia we have seen two Chinese and one American tourist. Before Ufa we met two motorcyclists who were from Germany. They rode from Germany to Ufa in five days. Their plan was to ride to Ulaanbataar, Mongolia and then back to Europe in five weeks. Our next step will be Ural Mountains.