The sun was shining in the sky of modern capital Astana. We cycled through the center to the edge of the city. The city ended as quickly as it had started. There were no more green fields of Northern Kazakhstan. Fields became dryer the further south we went. Trees disappeared while the road changed more hilly.

One rainy evening we cycled into the dark to find wood for fire. Two policemen stopped to check if we were OK. They told us to go to sleep. We continued for a while until we saw a big old grave structure. Rain made weather cold and we were wet. Luckily we found abandoned broken bench which we put into the fire. At the same time the rain stopped. 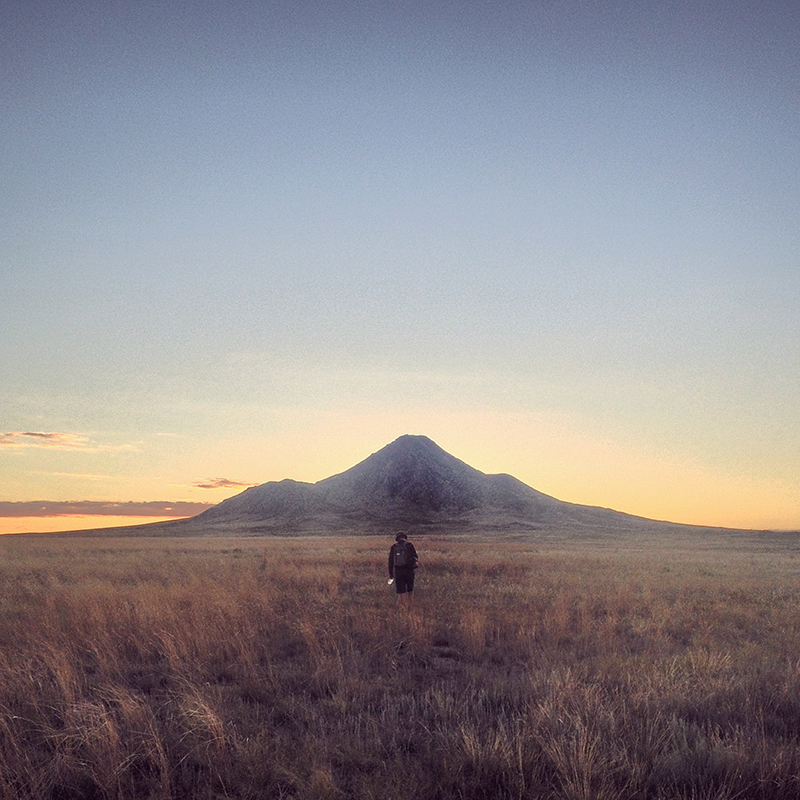 Next morning there were sheep around our tents. The day was warm. Air became dryer and dryer. We found a new dish, lagman, in cafes. It is very popular noodle dish in Central Asia. Welcomed change for Russian cuisine. We eat couple of lagmans and finished the day early. We set our tents next to peaceful road. On the other side of the road there was a little mountain about three kilometers away from our camp. We decided to walk there and climb on the top of it. We cycled half a way and left our bikes leaning towards each other in the middle of field, so it would be easy to find them on our way back. 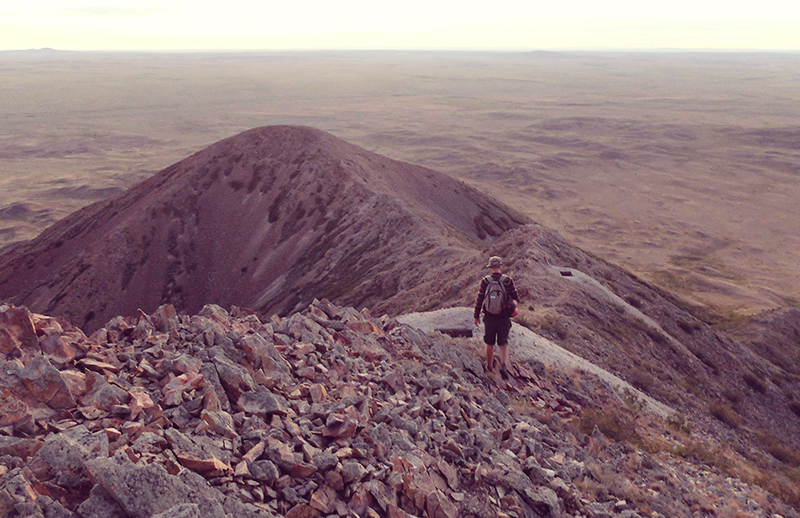 On the top of the mountain we shot photos quickly. Sun went down and it became dark, so we had to go down. We walked towards car lights, but we didn’t find our bike. We searched the bikes for an hour until we were back in our camp. Then we started to walk back to the mountain and finally we found the bikes, thanks god! 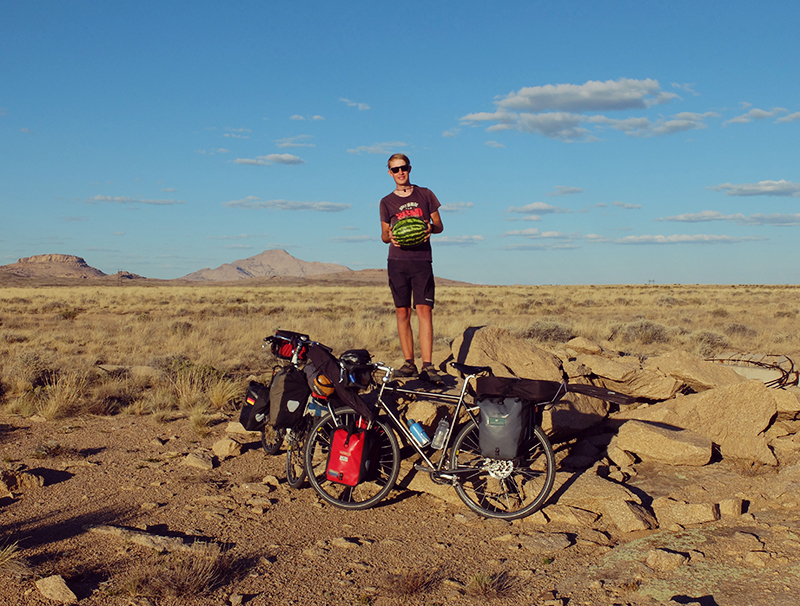 Car drivers woke us up with friendly honks. Most of the oncoming vehicles were old trucks which were fully loaded with huge water melons. Watching those trucks everyday on desert-like road made us hungry for water melons. Lauri asked one of the trucks to stop. And it stopped! Two funny hairy guys came out of the vehicle with fresh water melon. After short conversation we thanked and enjoyed the perfectly fresh melon. From then on we ate water melons daily. 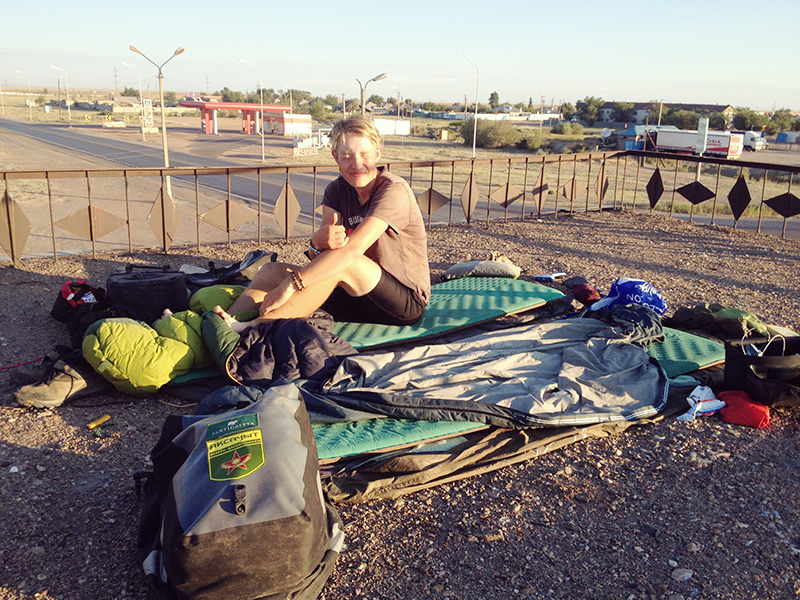 We cycled to the coast of turquoise Lake Balkhash. We wanted to see the boats. We met policeman who invited us to the closed area where they kept their police and safe boats. There we met TV group which were filming documentary for National TV Kazakhstan. The policeman asked if we wanted to have a boat cruise. Sure we wanted! Then we were sailing on beautiful lake with policemen and TV group. After the boat trip we went through the Balkhash city. One shopkeeper treated us a bag of food. In the edge of the city we climbed on the roof of old two-floor police checkpoint building. It was perfect place to spend a night. 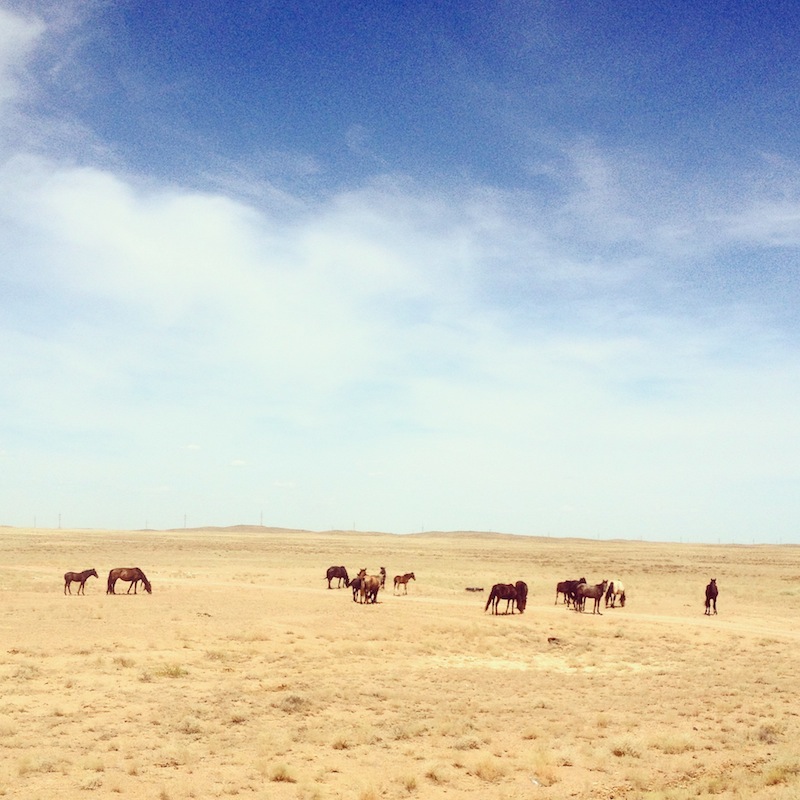 We followed the west coast of the lake for almost one week. The air was extremely hot and dry. Quite often we had to spend our breaks under the road in sewer pipes, because it was only shadow we found. Except few villages there was completely nothing. one morning seven camels passed our camp. 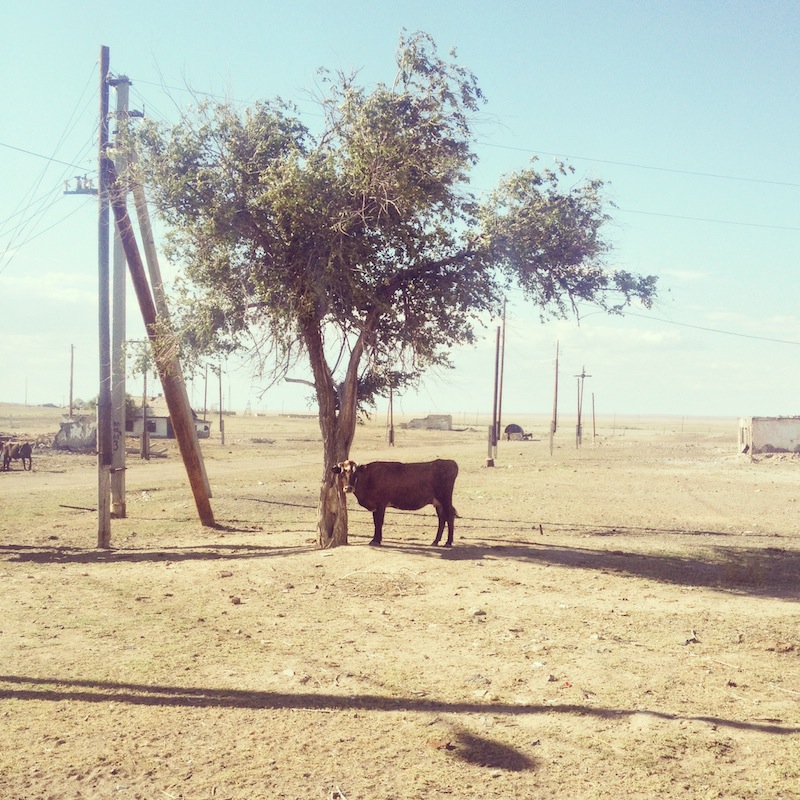 All the water melon truck drivers told us they were coming from Shu. We left the lake behind and cycled to the “water melon heaven” Shu. After little mountain we saw view to green water melon fields. It was the end of desert. Next to the road there were many reed huts and locals were selling melons from those huts. One farmer spotted us and asked if we wanted to share a water melon with him. We went a shelter next to the field. Three guys we already met two times stopped their car and joined us.

Last night in Kazakhstan we put our tents just five meters away from honeydew field so we didn’t need to care about supper and breakfast. Kyrgyzstan’s high snow-capped mountains appeared to the landscape. We were at the Korday’s border crossing in the evening. Next to the door to passport control there was lazy-looking older border guard leaning to wall. He didn’t let us go to the passport control queue. Instead he took our passports and stamped them by himself. Then we just walk into the Kyrgyzstan. The border crossing couldn’t have been any easier. We even didn’t need visas.

The capital of Kyrgyzstan, Bishkek began almost from the border. The country seemed way less developed compared to Russia and Kazakhstan. Mothers were carrying their babies, because strollers were used for business purpose. People were rushing to big marketplace, Osh bazaar with their old strollers to sell either bread or tea. Some of manhole covers were stolen, so we had to focus on cycling. Between lanes there were people begging money from drivers which stopped to the traffic lights.

We went to the first affordable hotel, which we found easily and took room for one month. We wanted to have a good rest, but we also had a long list of things to do. Finally we managed to get China visa, which were quite simple after all. We also applied one-year Working Holiday visa to Australia and new visa to Kazakhstan, because we think it will be easier to cross the border to China from Kazakhstan than Kyrgyzstan. We maintained our Pelagos and other equipment. Lauri changed his Brooks B17 Narrow saddle for wider Brooks B67. We made a trip to mountains, to beautiful Ala Archa national park. During the time here we have enjoyed delicious and cheap Kyrgyz food and drank a lot of horse milk which is very popular here.

It’s a pity to leave Kyrgyzstan, but I can’t wait to see China and rest of the World! 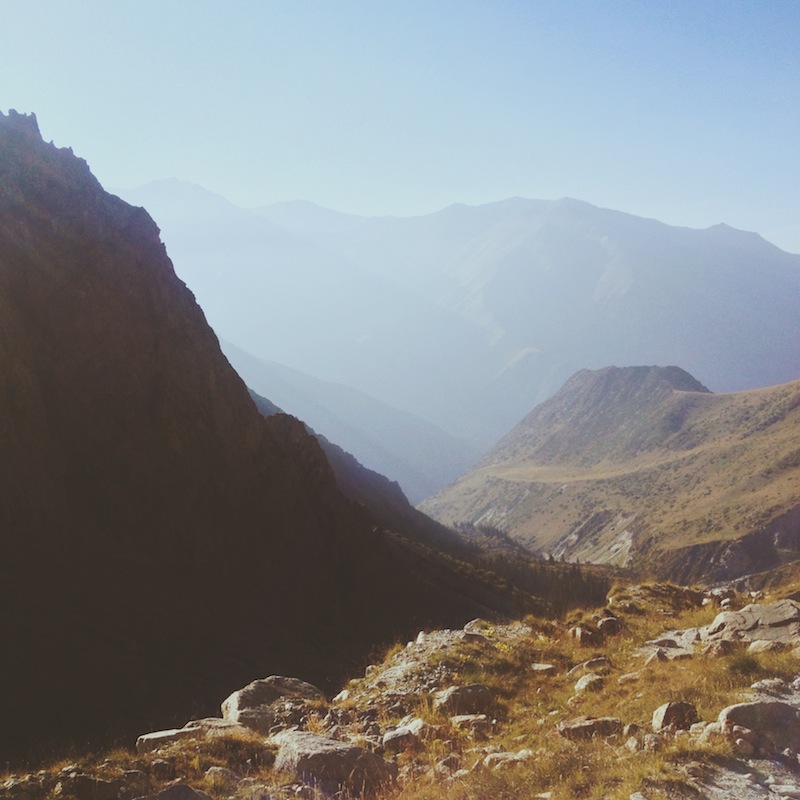 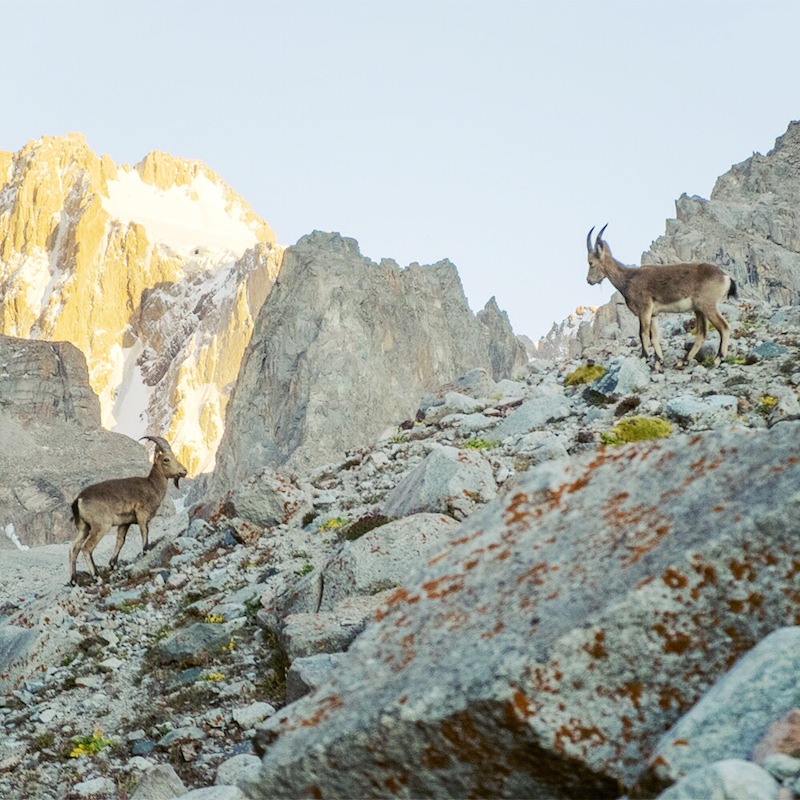 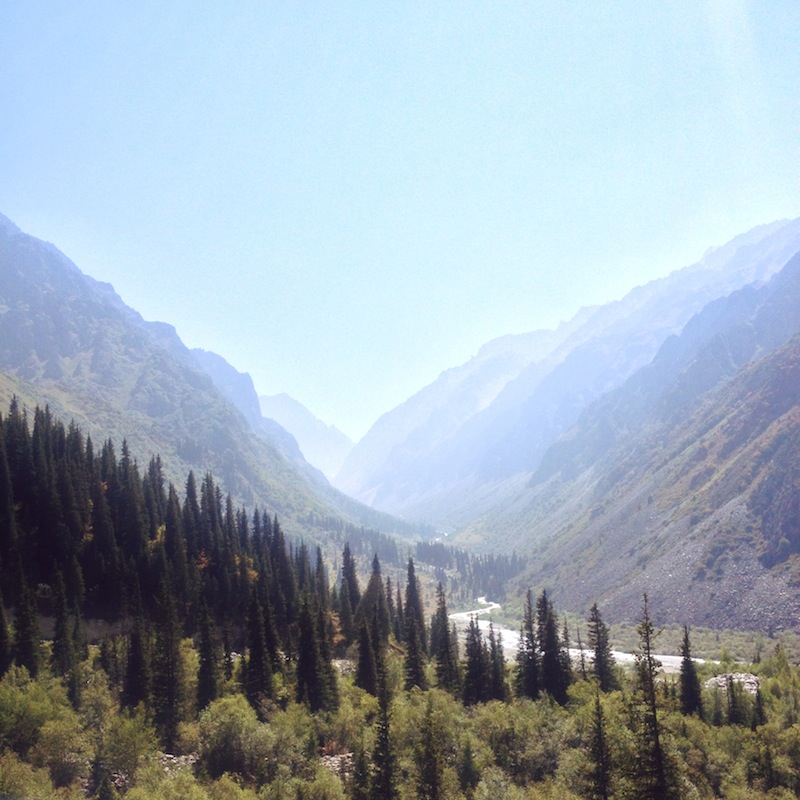 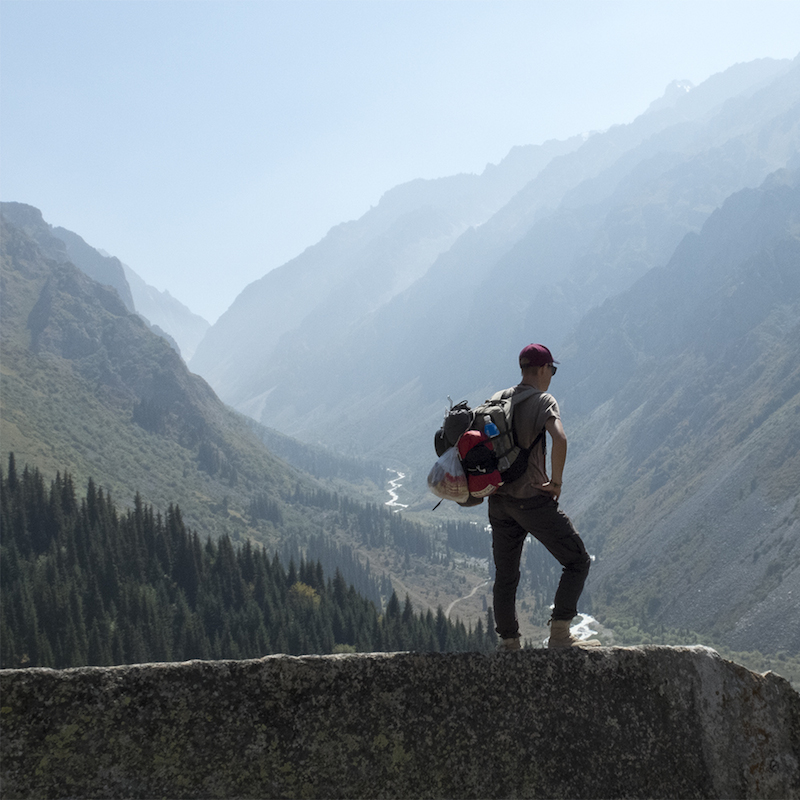