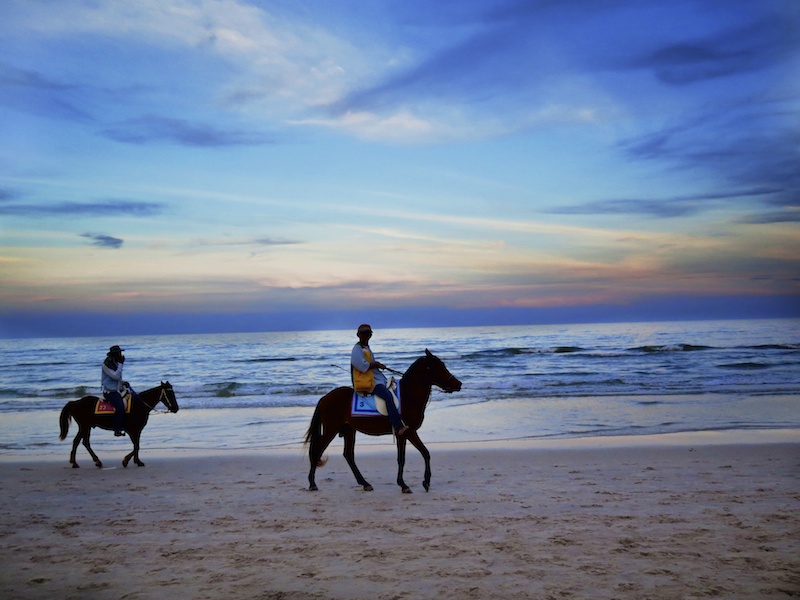 Back to the beach and fast!

We crossed a bridge of friendship, we exchanged riding side to left and Thailand welcomed us with open arms. In the first restaurant we ate heavenly Noodle Soup, and listened to the Cowboy cafe next door and the playlist had Neil Young and CCR. Could not have been better start for the day and for the weeks. We ate the last noodles and the hummed last verses of Fortunate Son and started pedaling back towards the dream beaches.

Stamped in our passport we got 87 658 minutes (two months …)time in Thailand that we thought we’d use at the sea. The sea was, however, 900 kilometers away and we decided to cycle fast these kilometers and go rest next to the sea. We drove the long days and we were happy of the progress. Now, as I write this blog, we are in Hua Hin “Toes in the water, ass in the sand” as Zac Brown Band sings. I have to admit that I was a bit lazy to make notes of the last few weeks, and now when I look at the booklet it only says: one rise to the mountain, big centipede, good places to camp, buffalo drinking spot washing, brothel and 10 000 km. So in other words, just some basic weeks. Usually I write a little more notes, but long days and big mileage took the power of me, so I write with a freestyle now. 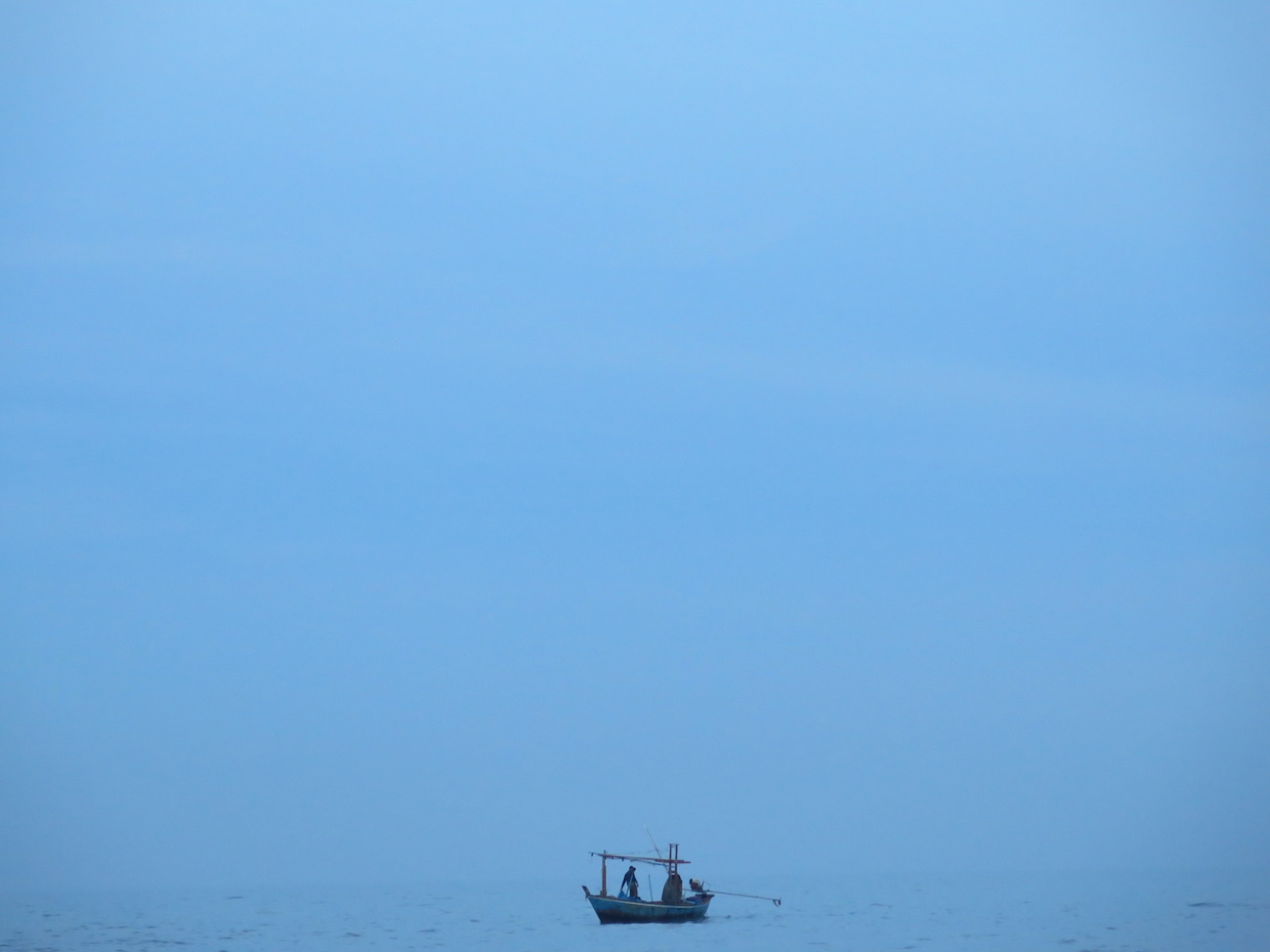 Let’s start with the mountain. The mountains have tired us a lot. When you cycle 45 degree angle uphill, ass burning with time limit it sometimes gets a bit desperate. Crying doesn’t help but sometimes its not so easy not to, because of the pain and the sun lotion that drips from your forehead to eyes. Well, we got long visas from Hanoi so that the worst scenario doesn’t happen and all in all we were positive about Thailands flatness. But every time you think that something s good there will be little suffering. As were this time. But this mountain was crossed quickly because of our diamond hard legs and proper tailwind. 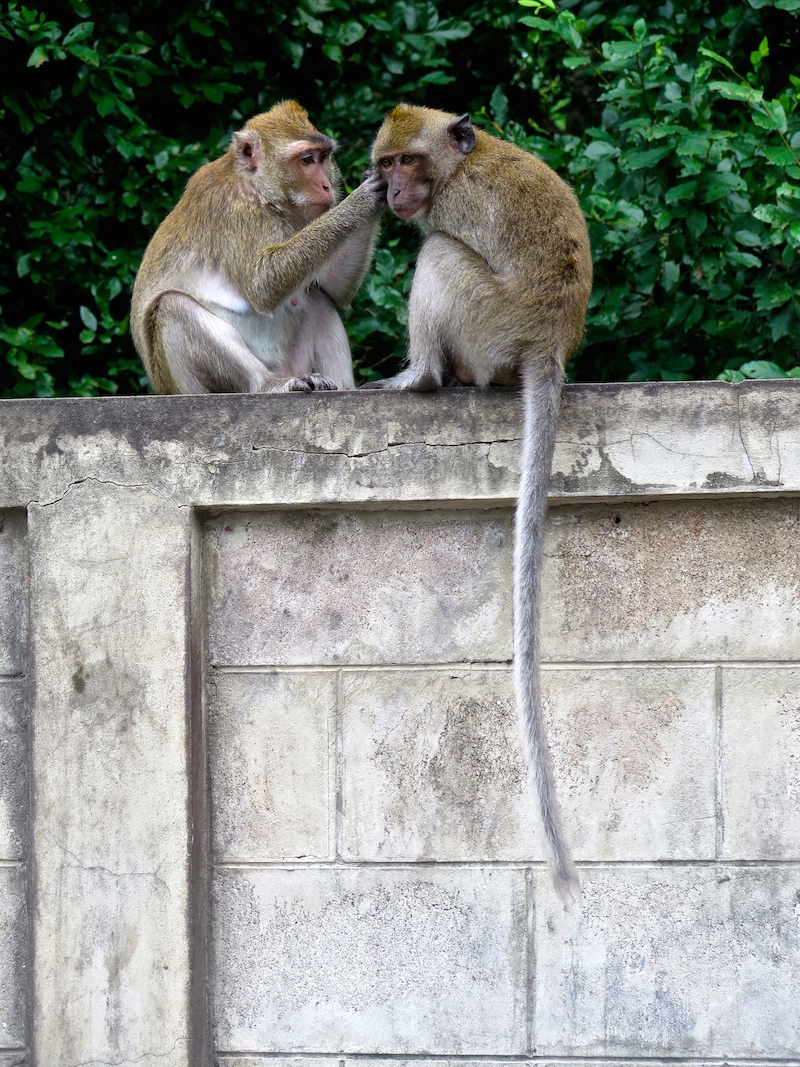 At the doctors office.

This brings us to centipedes. Fine transition, right? We camped out last few weeks more, because our money is starting to be a little under strain, and because wet bushes changed to more dry land. In such terrain camping is actually a real nice change from the cheap hotels and when you camp in nature, you automatically become more familiar with the local nature, which is nice. Especially in the morning you realize how full of life Thailand’s nature is. Over the tents are enormous grasshoppers, between legs there goes a few cockroaches and geckos are climbing on the walls. When you move little further from the noise you’ll find snakes jumping sideways and ENORMOUS centipedes. If you ask me, none of the palm sized spiders in China or Russias chasing stray dogs or Vietnams Five eyed praying mantises lift up the back of my hair, more than the huge muscular, strong and robotically forward passing centipedes. These toxic creatures has fortunately remained out of our tents and bites did not come from them. However, I checked in that, what centipedes bite causes. It causes tremendous pain in the extremities, swelling, redness, headache, increased pulse and vomiting. When you start to think about those, it actually sounds pretty normal, “Around the World cyclist” symptoms… Mosquito sting worried us a little because we had no Malaria vaccine. But we made it out of the most dangerous zone! 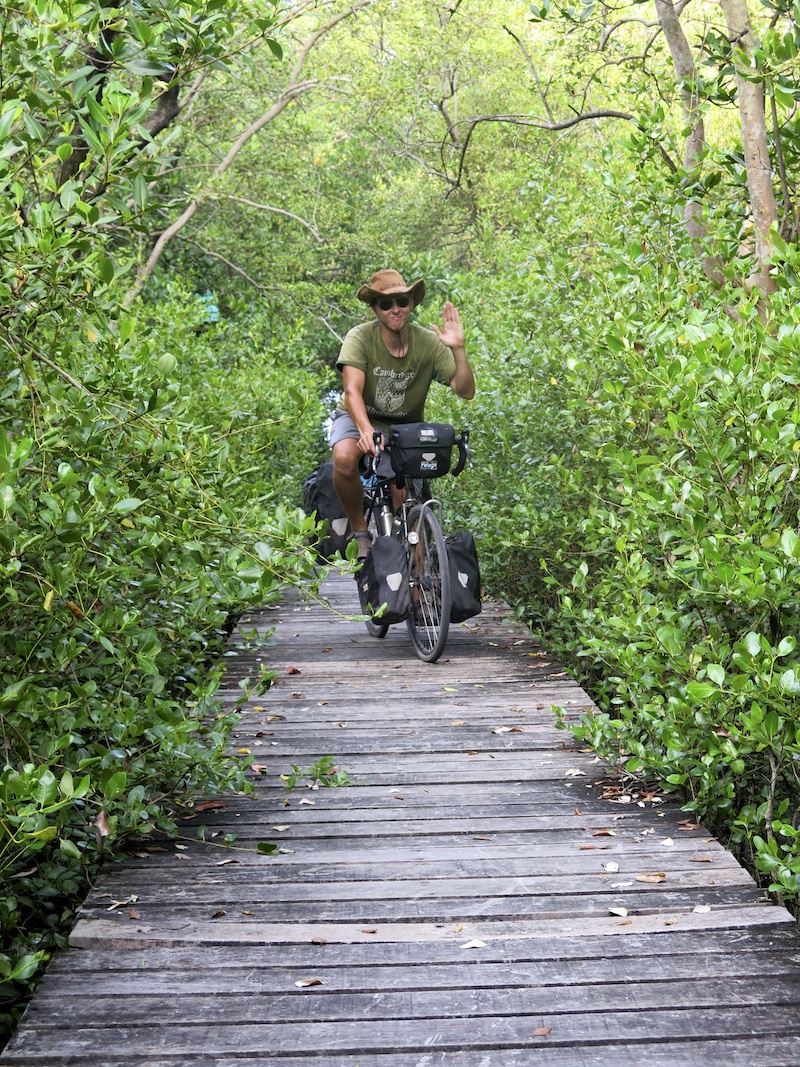 In the old days it was believed that a thick layer of dirt on the skin protect from diseases. We do not believe this, and something had to be done after four days of sweaty cycling and when flies like to hang with us rather than in a pile of manure. We were looking frantically water where we could wash this three cm long slime from our skin. We began to lose hope of finding water until we found paradise: buffalo drinking place. Its probably quite weird site to some Thai farmer to see two Finnish white bellied guys washing themselves in some small pond. We didn’t care about that until one of the local lades laughed and said there are lot of leeches in that pond. The next day we went to hotel to get a shower… Mosty we found brilliant camping sites and started to get to the rhythm of locals: wake up at 6am and go to sleep at 9pm. Or, at least in most cases. 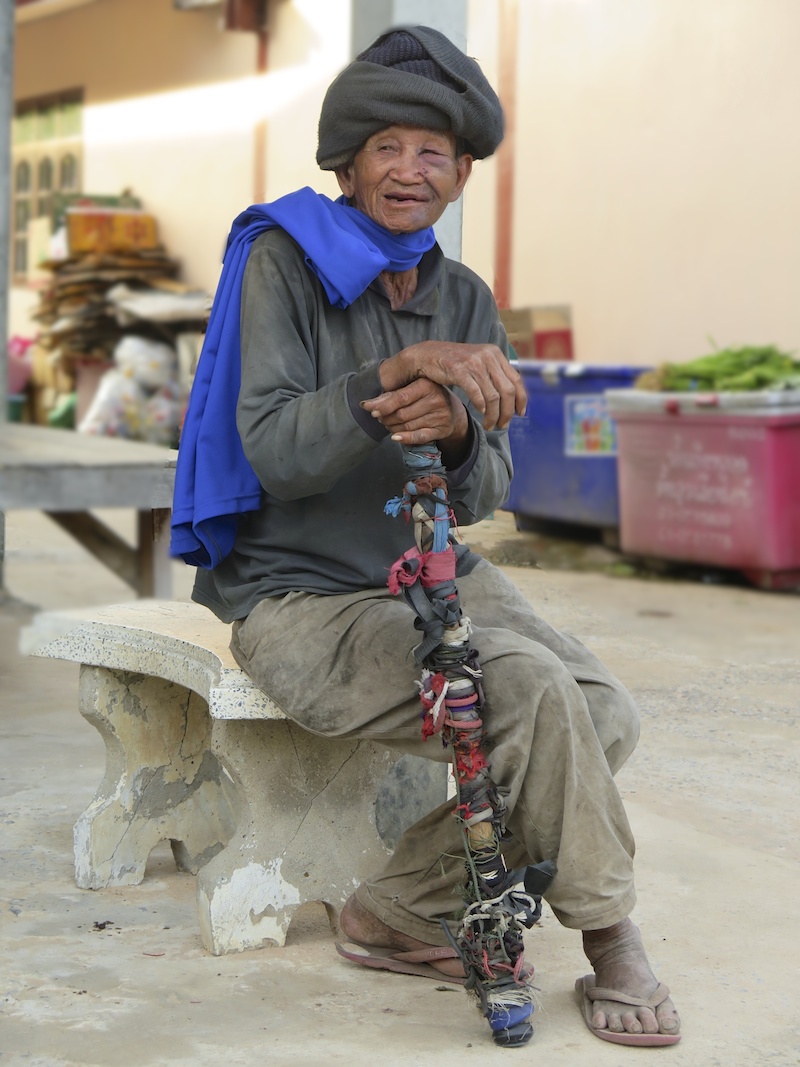 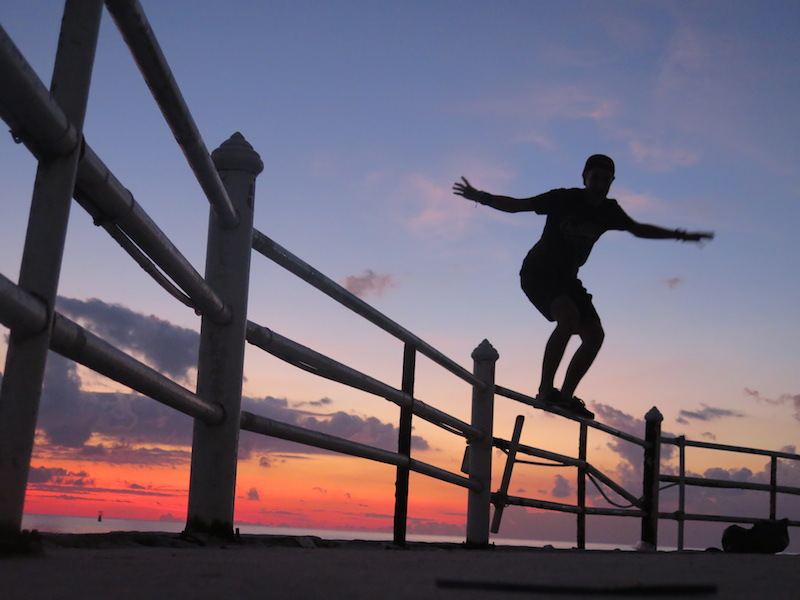 Sunrise at this side of the world.

This brings us to brothel. Even better transition, right? We were on schedule, the wind blew us forward and Thailand, sometimes eight-lane road ensured trouble free progression. The distance was 90 kilometers to Bangkok where we had the idea of visiting diving equipment store and bike store to replace our terrible outer tires to better and leave the city. When we got to the city stress-free ride ended and we started riding between between cars. Bangkok is different from the other Asian major cities, because the big amount of cars instead of motorcycles. And there the traffic does not move at all! Diving shop check, which I bought diving glasses for myself. Bike shop check, which from we didn’t find proper tires and so we started to leave the city. Riding between cars, dragging bikes up the stairs many many times and we finally got out of that massive city. Our bike computers showed that there had already been in the 120 kilometers cycling this day, and we started to be very tired. We decided to navigate to the hotel where we could cool ourselves as the temperature approached 35 degrees. The darkness came upon us, and we spotted the hotel. The hotel did not have the classic reception, but we saw the owner walking busily between rooms. We rushed to him happily, because this hotel was the only one in 30 kilometer radius and asked him the price. After a few call after phone was given to me and then a strange voice asked that if we wanted “Three hours or the whole night?”. “Who would want…” until I realized that the hotel is not what we were looking for. We went out and the doors made sure that not just any hotel, but “Love Hotel”. We bursted into laughter and continued. We found an unfinished building which seemed like a great place for the tent, but the heat of the night drove us crazy. 7eleven ice and 6 liters of water made things a little easier but were were quite tired when the next day we arrived to the sea and eventually to here, Hua Hin.

So this was our last couple of weeks news! We also crossed the mark of 10 000 kilometers! Now I could adress a few popular questions we get along the way!

How do you manage each other there? Do you sometimes feel like going to opposite directions?
-Throughly after 10 000 km you would think that we would be fed up to each other and go to different directions. It is just a little kinky situation because in the other direction is winter so we have to go the same way … just joking. Good question, and frequently asked. We think of traveling quite the same way. We want to see the same things and our fitness is in the same range. If one is not feeling good 90% time other one feels the same. If either of us feels tired of cycling 90% of time other doesn’t feel like cycling either. It seems like we have been carved from the same wood. We can also give each other our own time, for example we walk around the cities alone. We’re throwing a bad jokes in little tiring situations and know how to act quickly together, for example, when the bike is being stolen. Traveling alone has its good sides, but the truth is, as Christopher McCandless said in his life: “Happiness only real when shared.” Wow, that was a little too fancy answer…

How your fitness manages?
-Sometimes its terrible when we have to cycle uphills and against head wind, but our fitness has improved so that we are able to “easily” ride 100 miles a day. Of all the toughest days were Russia’s last days. The beginning of the knee pain disappeared on with both of us and how far we want to go really depends how far we fancy to go if you know what I mean. We are so relaxed with the idea of cycling, that our fitness is not a problem. If were tired we rest and if we feel like cycling we can go for 150 plus kilometers.

How do you navigate?
-Mostly with sun and stars. Actually, we have an iPhone which have application ”Maps.me”. We recommend this combination for everyone! It sees the exact location and the current version has the route lengths and other goodies.

Where you cut your hair?
-No one did ask for this … But if something starts to interest, so at the beginning of Antti cut me a let its army knife, and the outcome was awful. Today we use local barbers which costs three euros.