It’s been a while since the last time I wrote here. A lot has happened so it’s a high time to write things down before I forget them. I’m writing from Brisbane, Australia where I have been living at the share house and working at the warehouse for three months now. At weekends I have used to cycle to the dog kennel to see Lauri, who has been working and living there since February. Lately the only thing reminding me about such a bike tour we once started has been my camping gear collecting dust on the floor of my room. But things are going to change. Soon I’ll fly to the next continent. 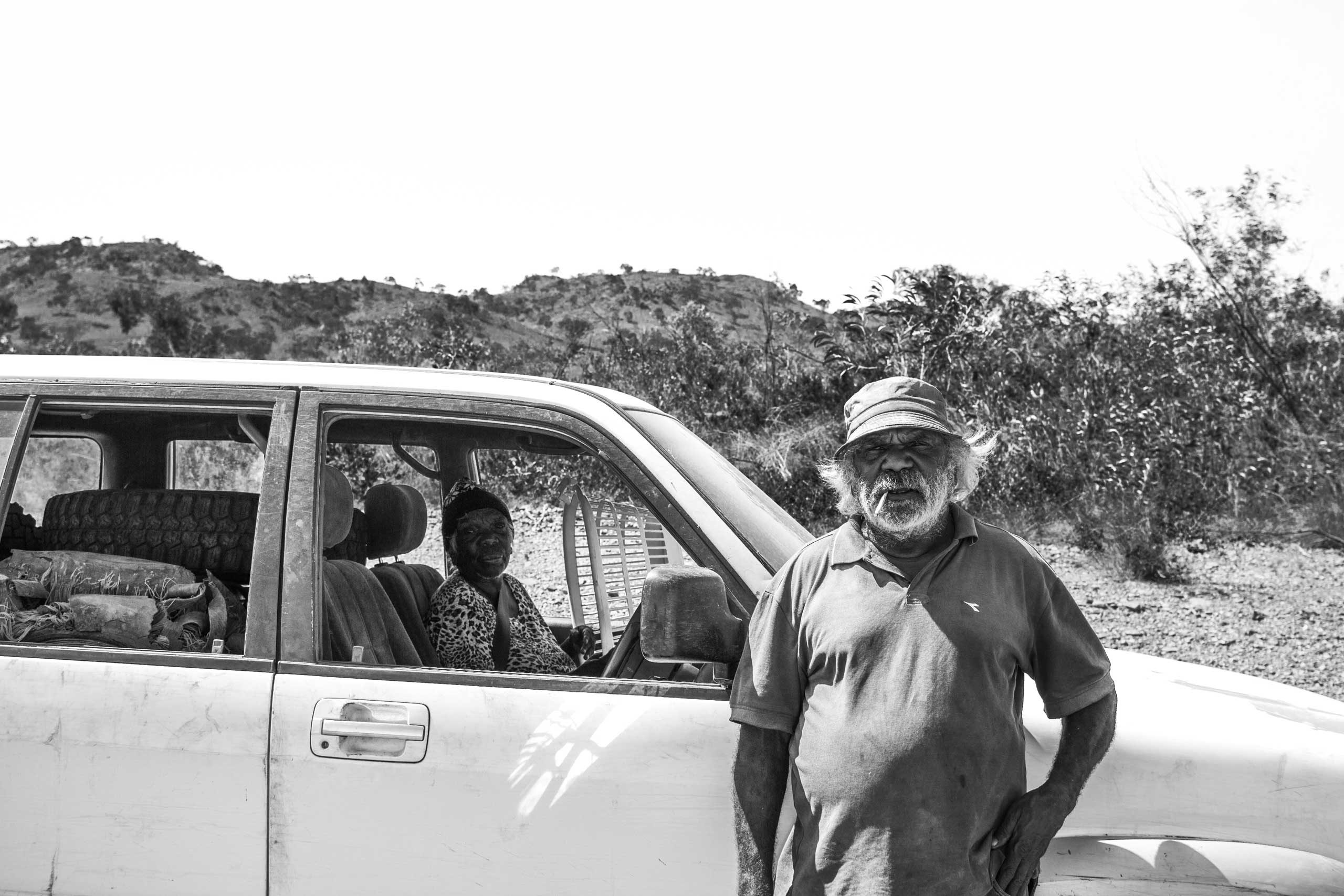 STUART HIGHWAY, EARLY 2015 | I woke up from my comfortable motel room, walked to the reception for a brekkie, cleaned the rooms and then I jumped into the pool to cool down, until my evening shift began at the kitchen of the motel’s restaurant. I prepared pizzas, oyster and salads for the customers and made one meal for myself and went to bed. That’s how I lived simple life serving travelers in Tennant Creek, surrounded by a desert. Sometimes I stayed two weeks in row at the motel area without going anywhere, because in Tennant Creek there’s not much to do except reading the bulletin board of the only grocery of the town, but that’s why Tennant Creek was so intriguing place to live. Sometimes I climbed on the top of the one of the hills with my workmates to watch distant storms. I was happy to take it easy and give time for my body to recover from months of cycling. The money I earned was also very welcome. I had had just one hundred euros left when I arrived to Tennant Creek and I knew I was going to fly back to Finland after few months for my sister’s wedding.

In early May it wasn’t too hot anymore. Australia’s winter was coming. Few days before I finished my work, David and Holly arrived to the motel. We had met them in summer 2014 in Bishkek, Kyrgyzstan. They had cycled all the way from UK to Australia and were on their way to David’s home near Sydney. We were still waiting for other two UK cyclists, Russ and Jacob. They had also cycled all the way from UK, but they didn’t make it to Tennant Creek before I left the town with David and Holly to cycle last 2000 kilometers of Stuart Highway to the south coast of Australia. 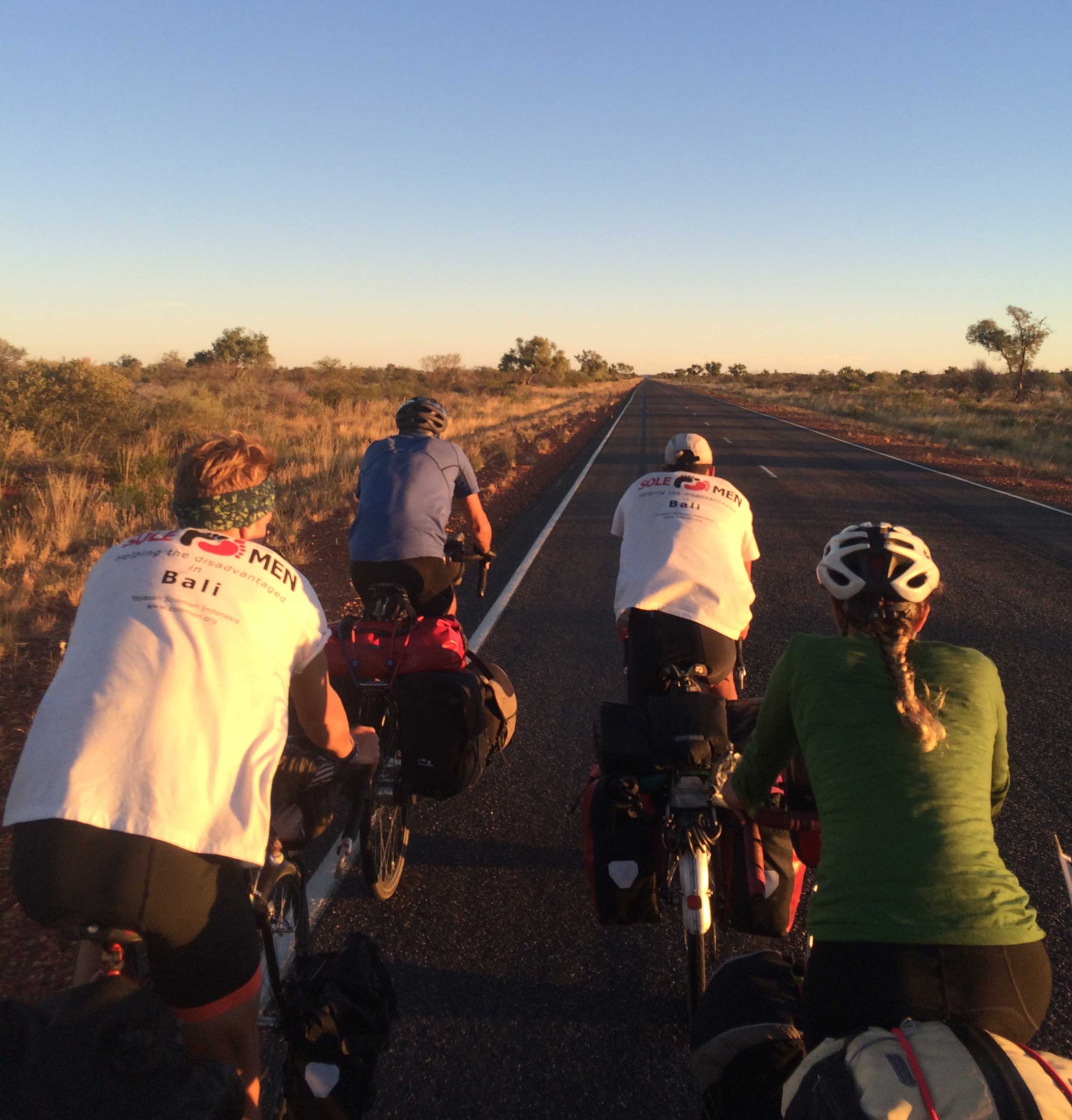 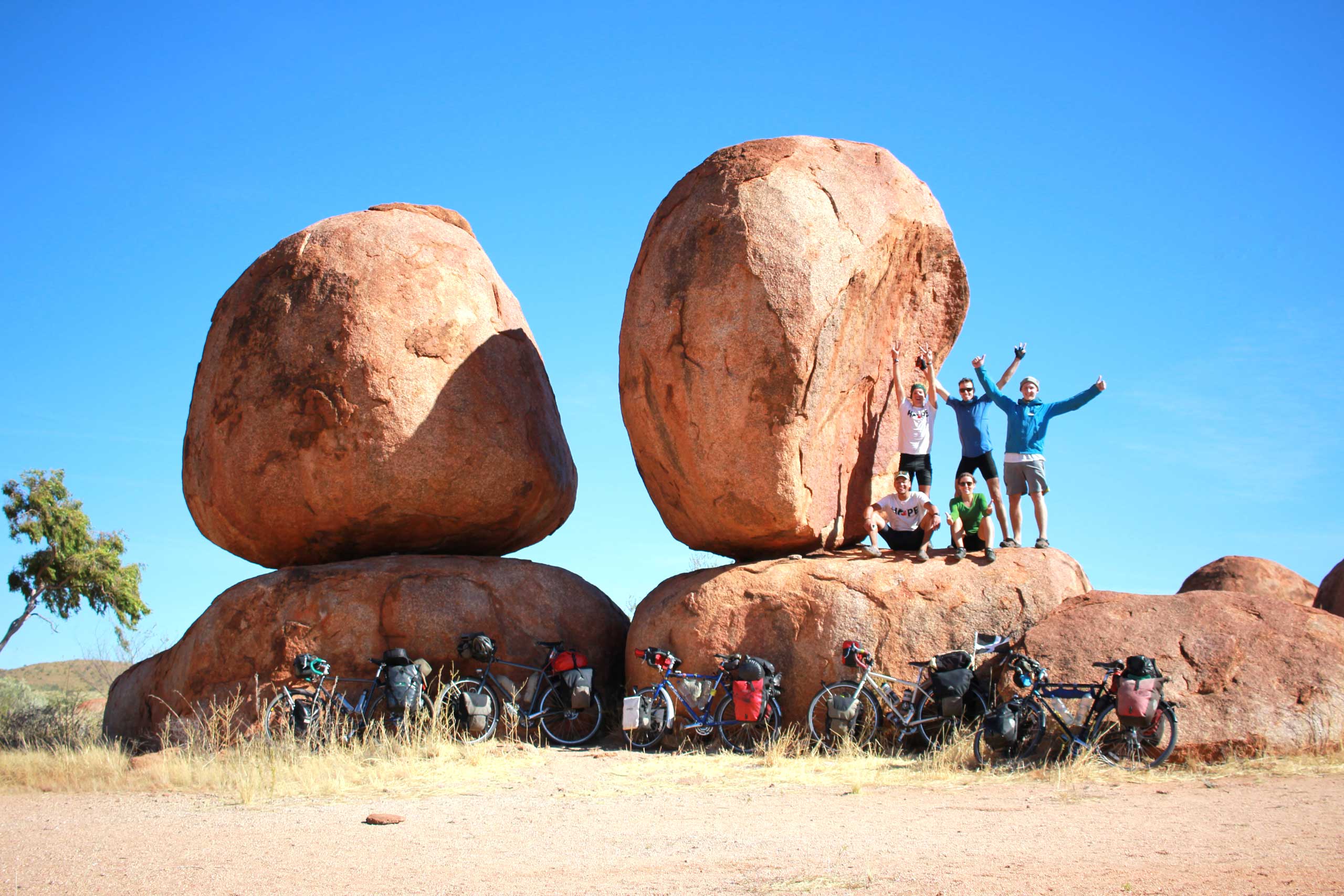 I made my best to keep up with David and Holly, but already after first 20 kilometers I was so exhausted I had to drop behind them, but I made it to their camp by the evening. To our surprise Russ and Jacob also arrived to the camp that night. They had hitchhiked to Tennant Creek earlier on that day and cycled rest of the way to our camp. Next days we were smashing 100km-days in a crazy headwind, and sharing our experiences around the world. It was great cycle in a big group! We met a few other cyclists and saw dingos, emus, wallabies and cows next to the road every now and then, otherwise landscape was very repetitive flat desert. Before Alice Springs my body started to get used to cycling again and I felt better than for ages. We were pretty sure we would have been able to cycle faster than 40km/h if we were going north instead of cycling south towards the wind. 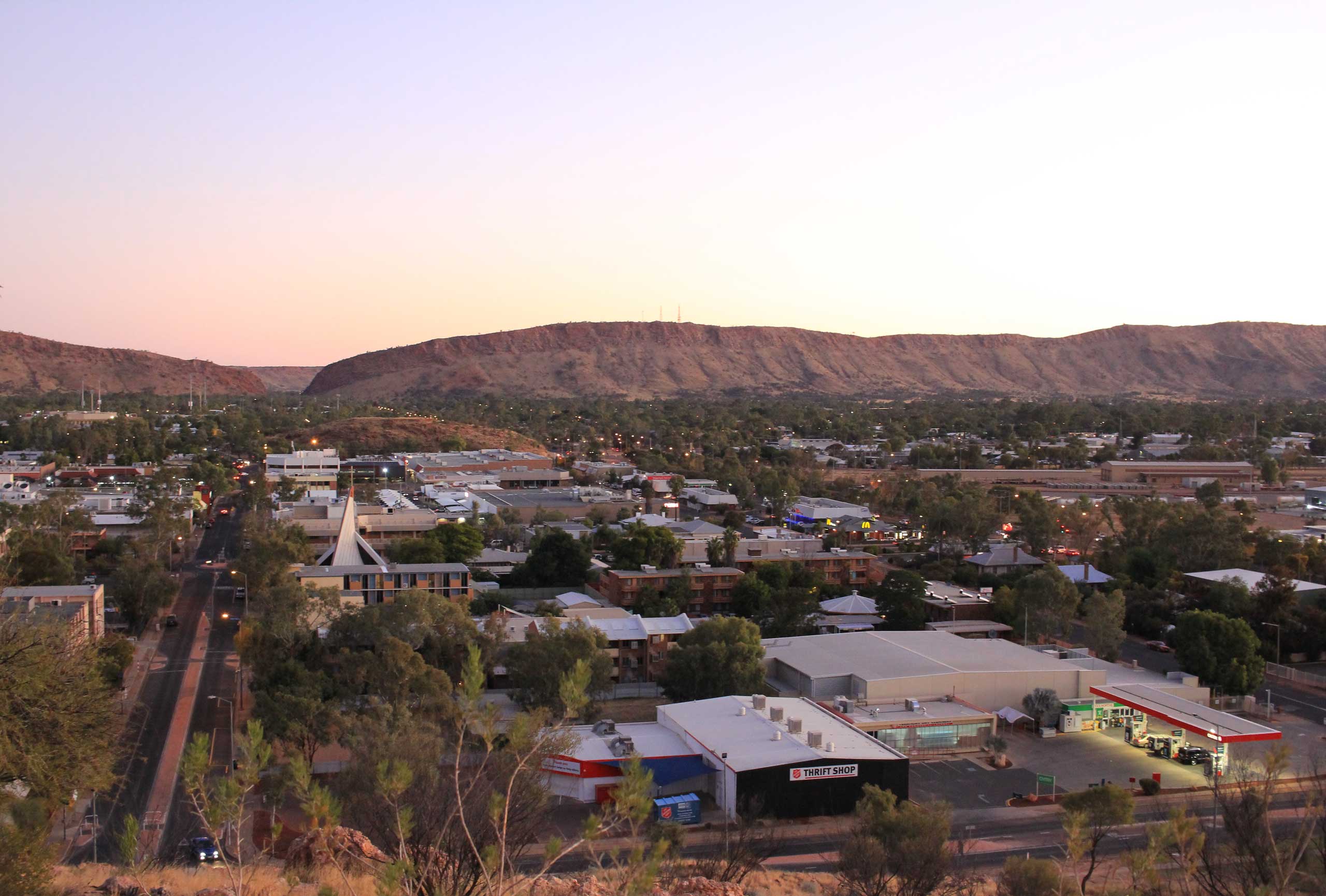 Alice Springs is the biggest city on Stuart Highway with it’s population of 25 000. The evening we arrived there we met a French cyclist who joined us and together we went camping to the dry river bottom. I didn’t have my tent anymore. It got broken when I arrived to Tennant Creek and finally it got lost one night I was camping near Tennant Creek when I had to leave the camp because of a storm. Now I was sleeping in my hammock. 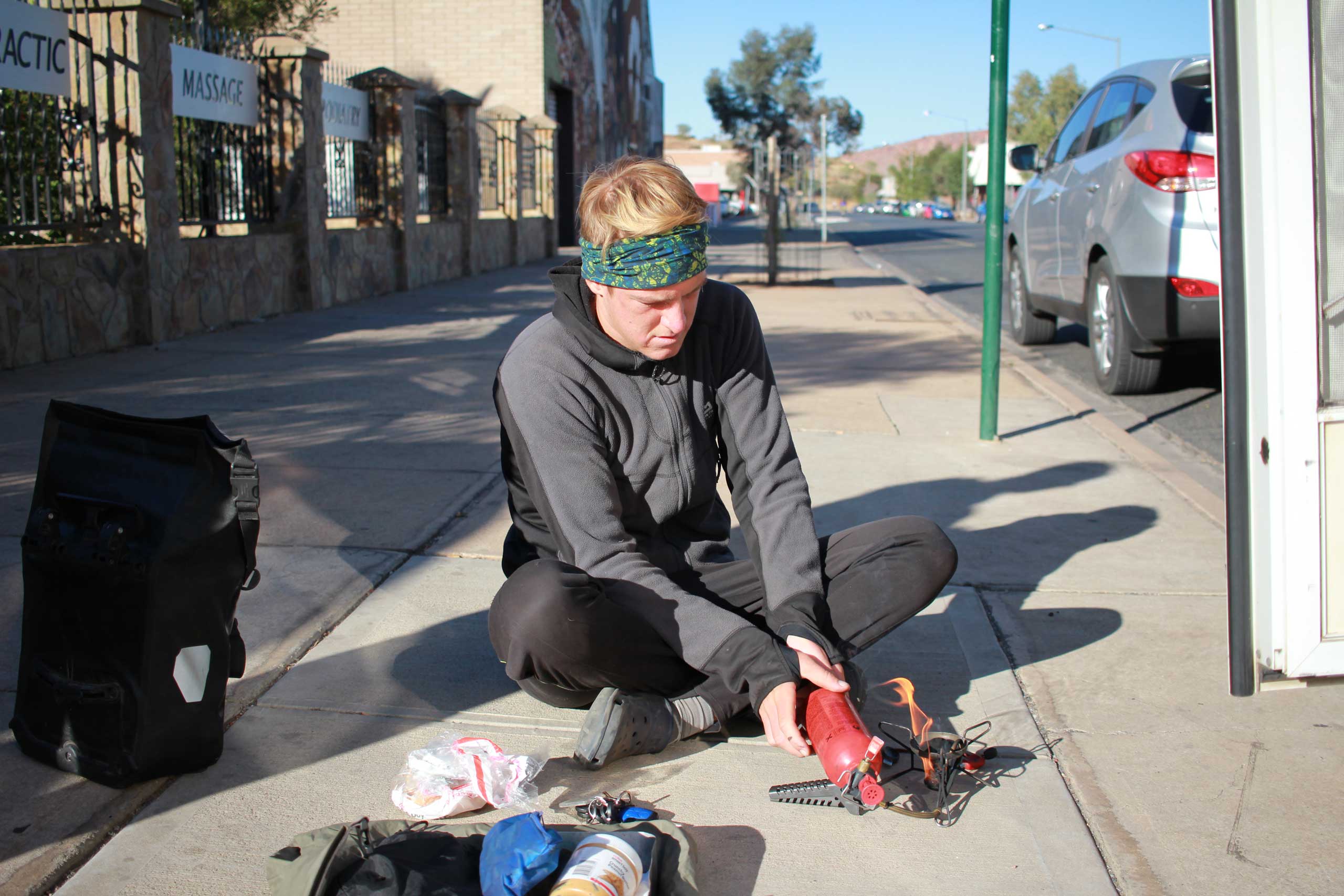 In the morning Jacob and Russ began to look for a caravan to drive it to Sydney for new customers. They had to start to work soon so they couldn’t cycle anymore. David and Holly went to meet David’s cousin who was living in the town. I went to look for a warmer sleeping bag and spare parts for my broken front pannier. Jacob and Russ got their caravan and David and Holly wanted to stay longer in Alice Springs and they were planning a trip to Ayers Rock, which I wasn’t too excited about, so I decided to continue south on my own. 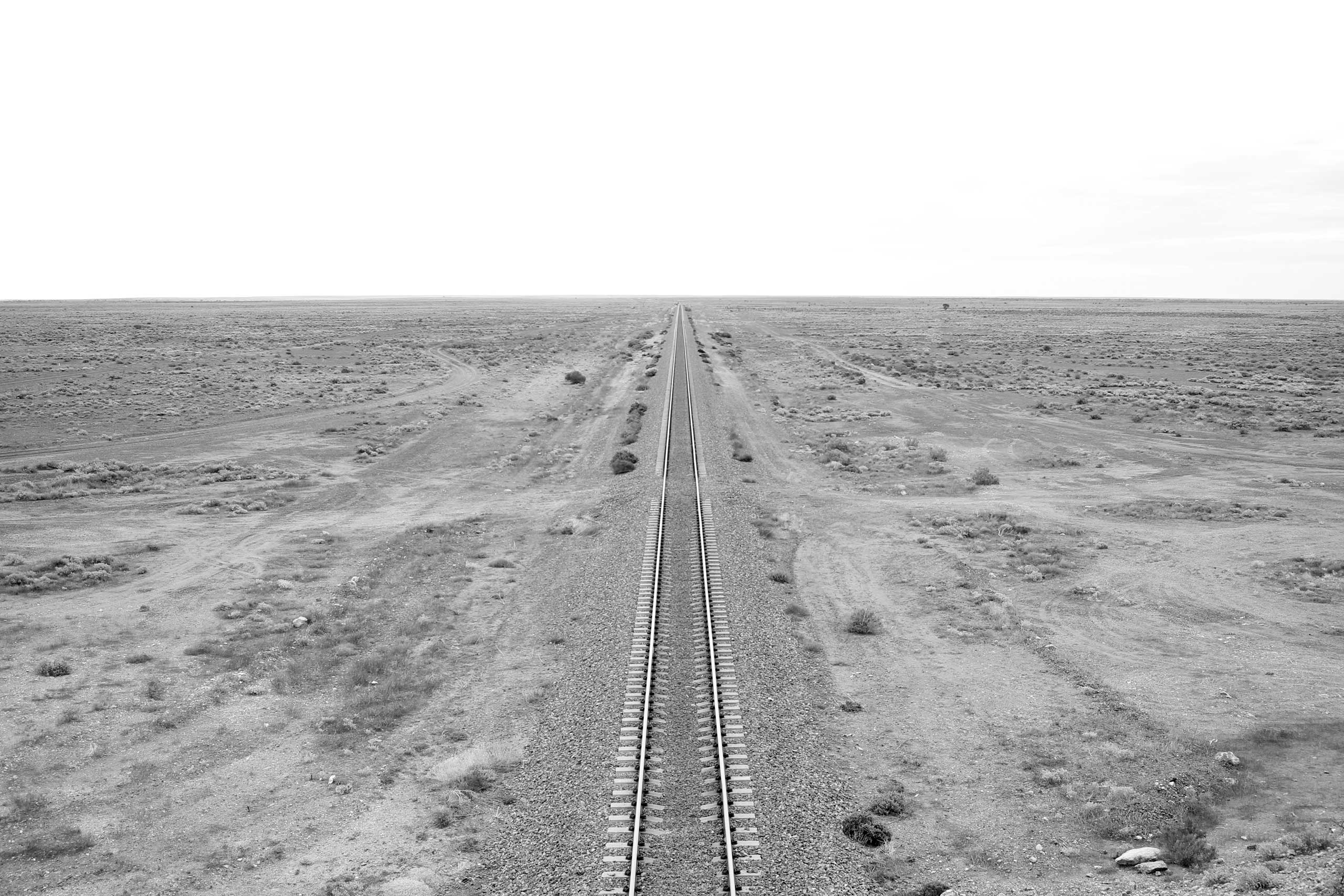 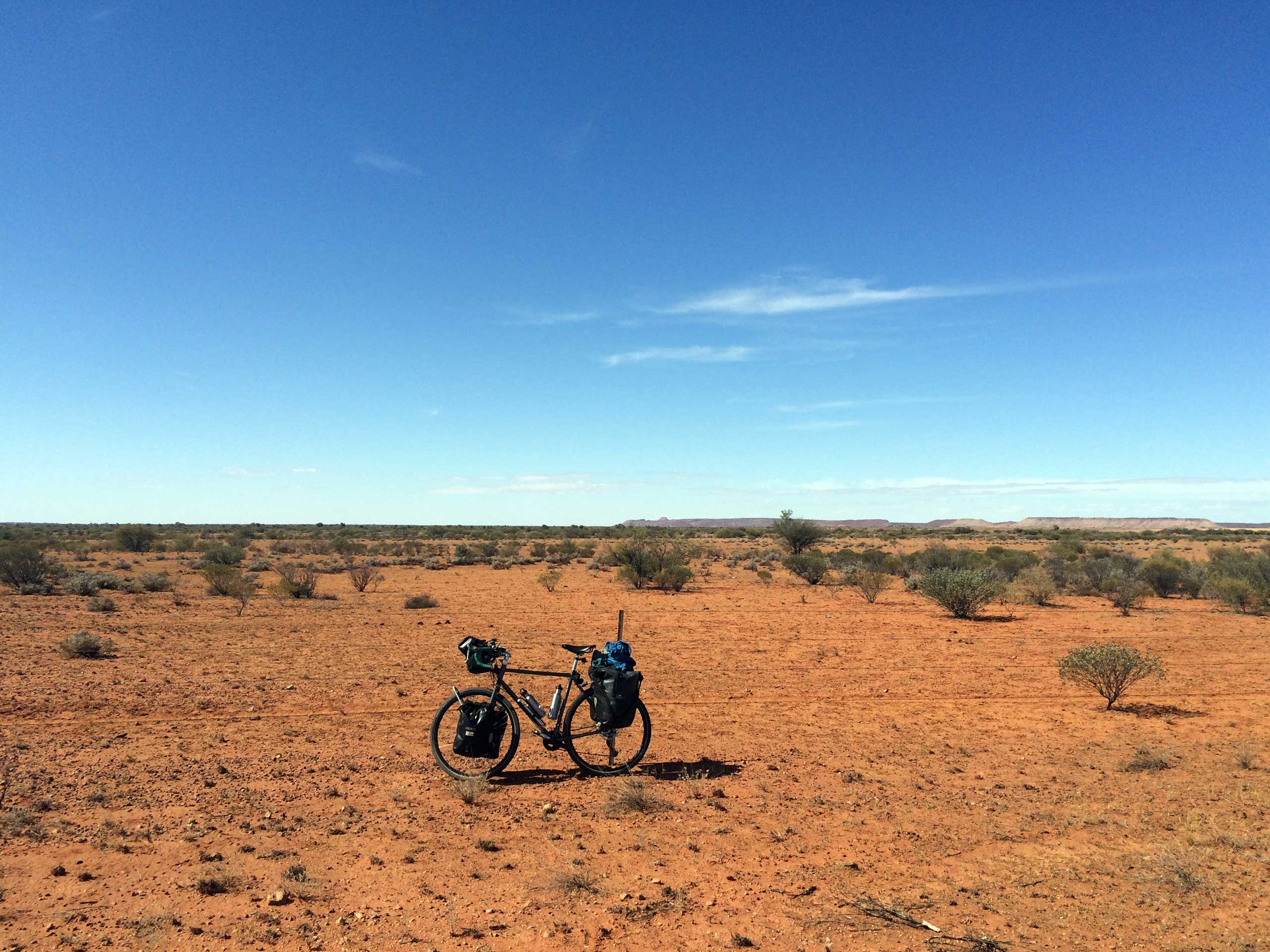 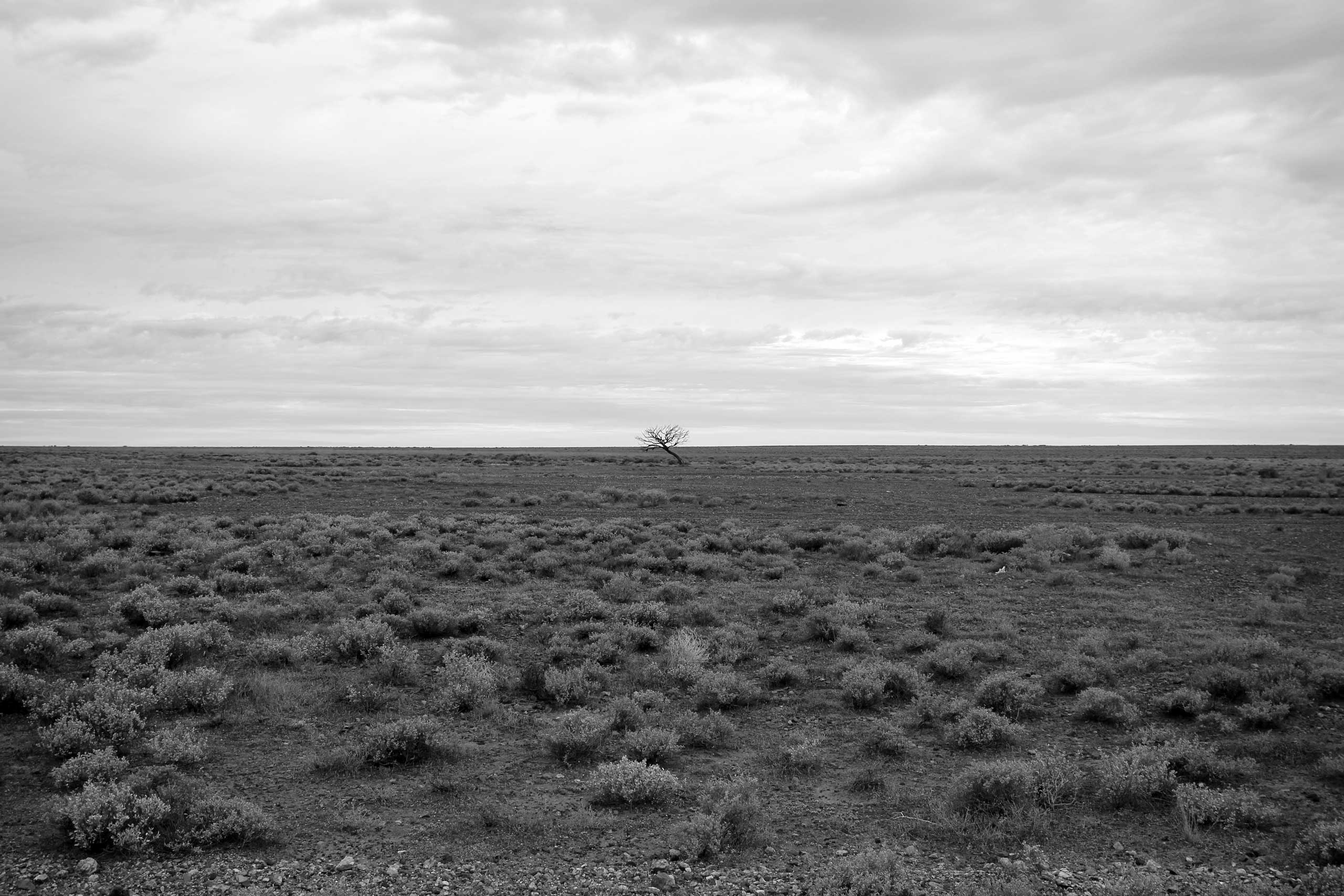 Next six hundred kilometers I felt like I was pedaling an exercise bike and staring an unreal picture of a never ending road. Every camp I had was like a copy of the previous one. Only proof of my progress was a ”Welcome to South Australia” sign. One hundred kilometers before Coober Pedy I got frustrated, stopped cycling and started to wait for a next car. Earlier on that day I had met a French guy who had hitchhiked from France to Australia. That morning he had been waiting a lift for more than three hours without luck. I was luckier. The first van picked me up. The driver was Bob who had escaped from former Yugoslavia to Australia in 1970s to look for a better life. Now he was on his way from his home Alice Springs to Adelaide to sell his car. I jumped off in Coober Pedy.

Coober Pedy is a town known for its opal mines and underground houses. Houses are built below the ground because of the hot summer temperatures. Now it was very cold. After a bad night’s sleep I pushed my bike to the gas station and went inside to escape the cold. My phone chose to play me Kings of Leon – Cold Desert. It was a perfect song for that moment. I woke up five hours later when someone asked if I was alright. I went out to look for a warmer place to sleep. I climbed on the top of the one of the underground houses and set up my hammock’s raincover as a tent. Then I heated up the tent by burning my stove in it until it was nicely warm. It was one of the best camp spots for a while. 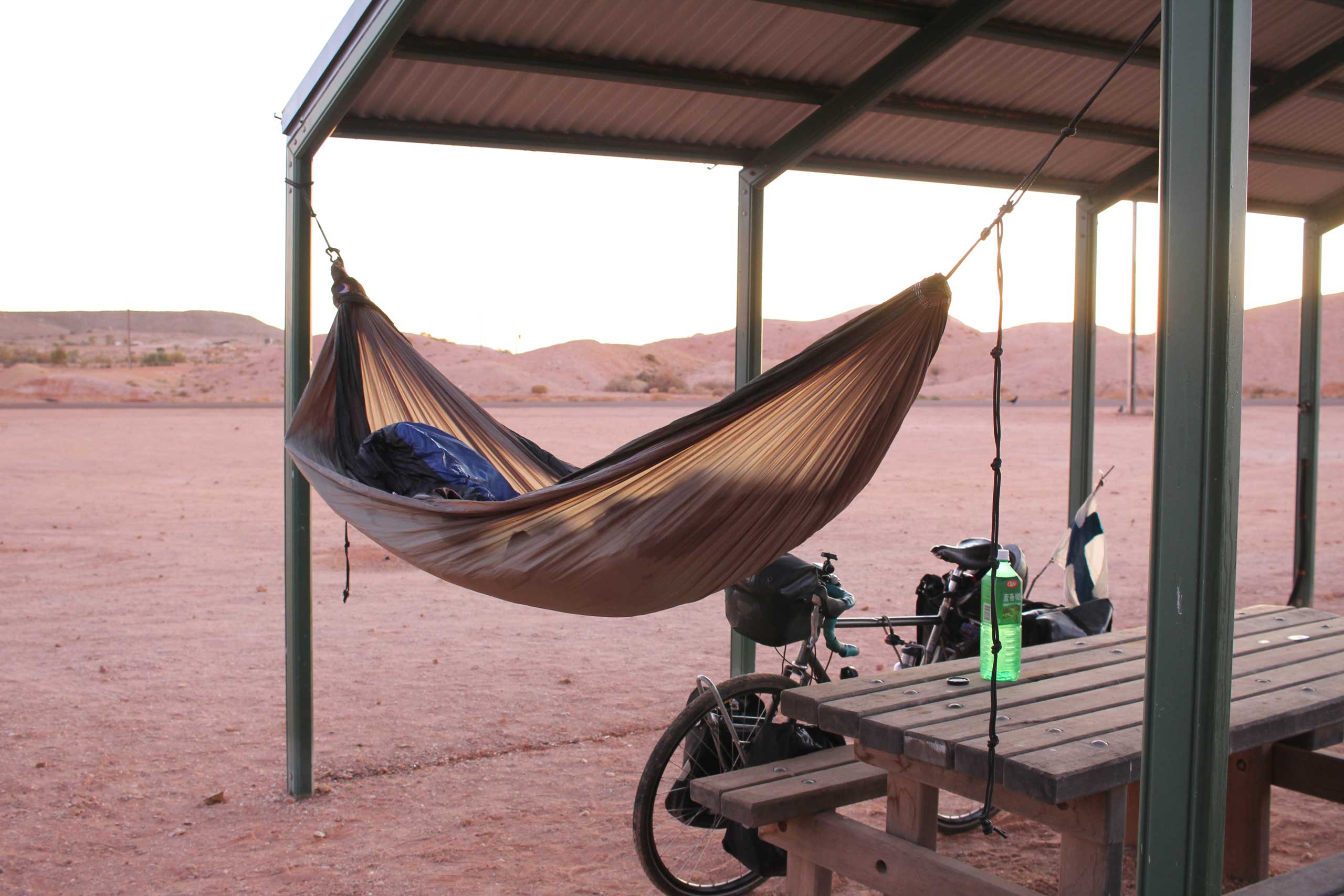 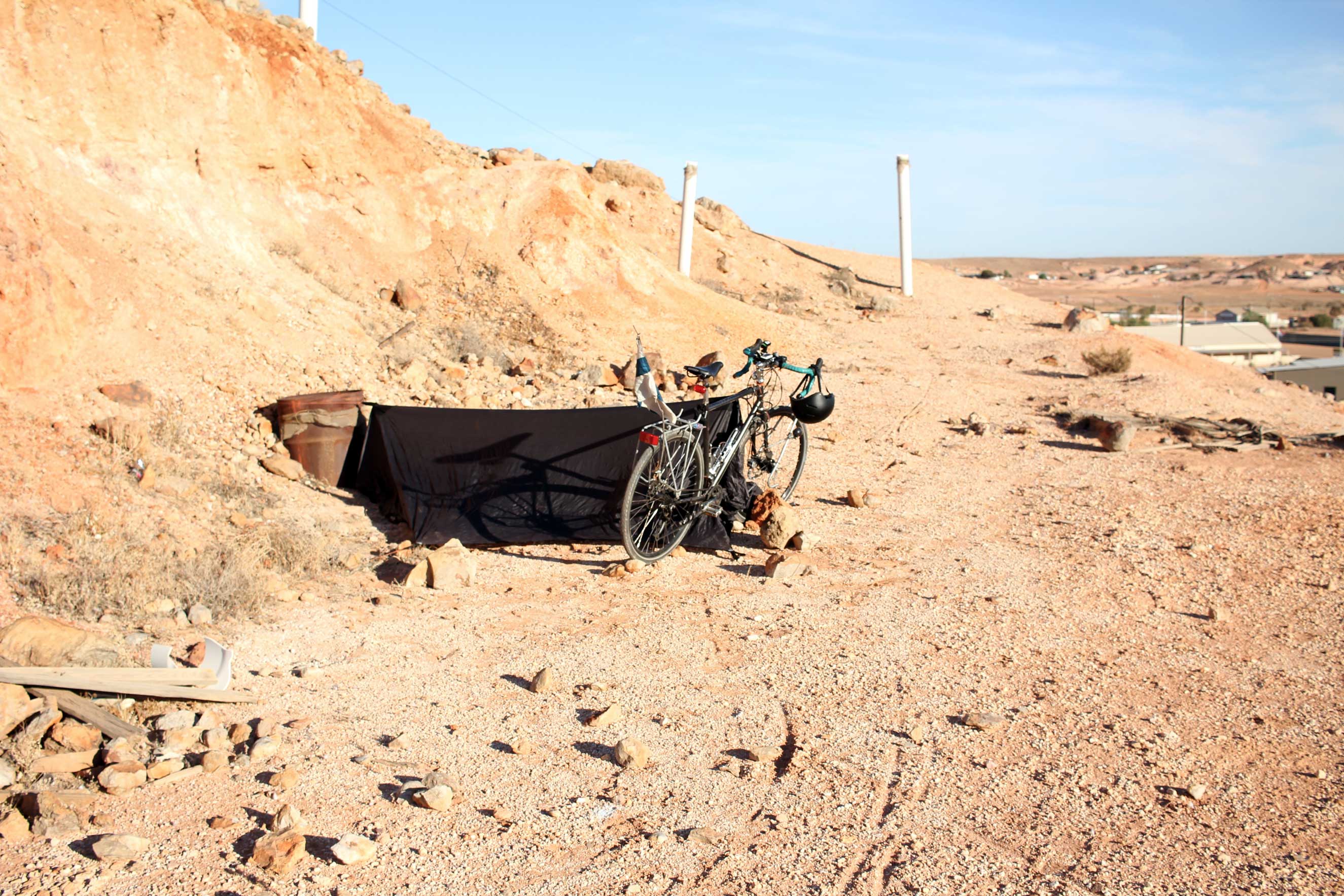 Next day I met very experienced Japanese cyclist at the grocery. He had cycled across Asia, Africa, both Americas and was now finishing his around the world trip by cycling across Australia. I promised to follow him to the camping area he knew after I’d have done my shoppings. I changed my plans after meeting too Greeks in front of the grocery. One of them had seen me the day earlier and was wondering where I stayed the night. His friend, who introduced himself as Greek Serif, invited me to his home. I followed their car to Serif’s house. He gave me the keys and went back to the town with his friend to continue their afternoon coffee. What a great feeling it was to have a hot shower! 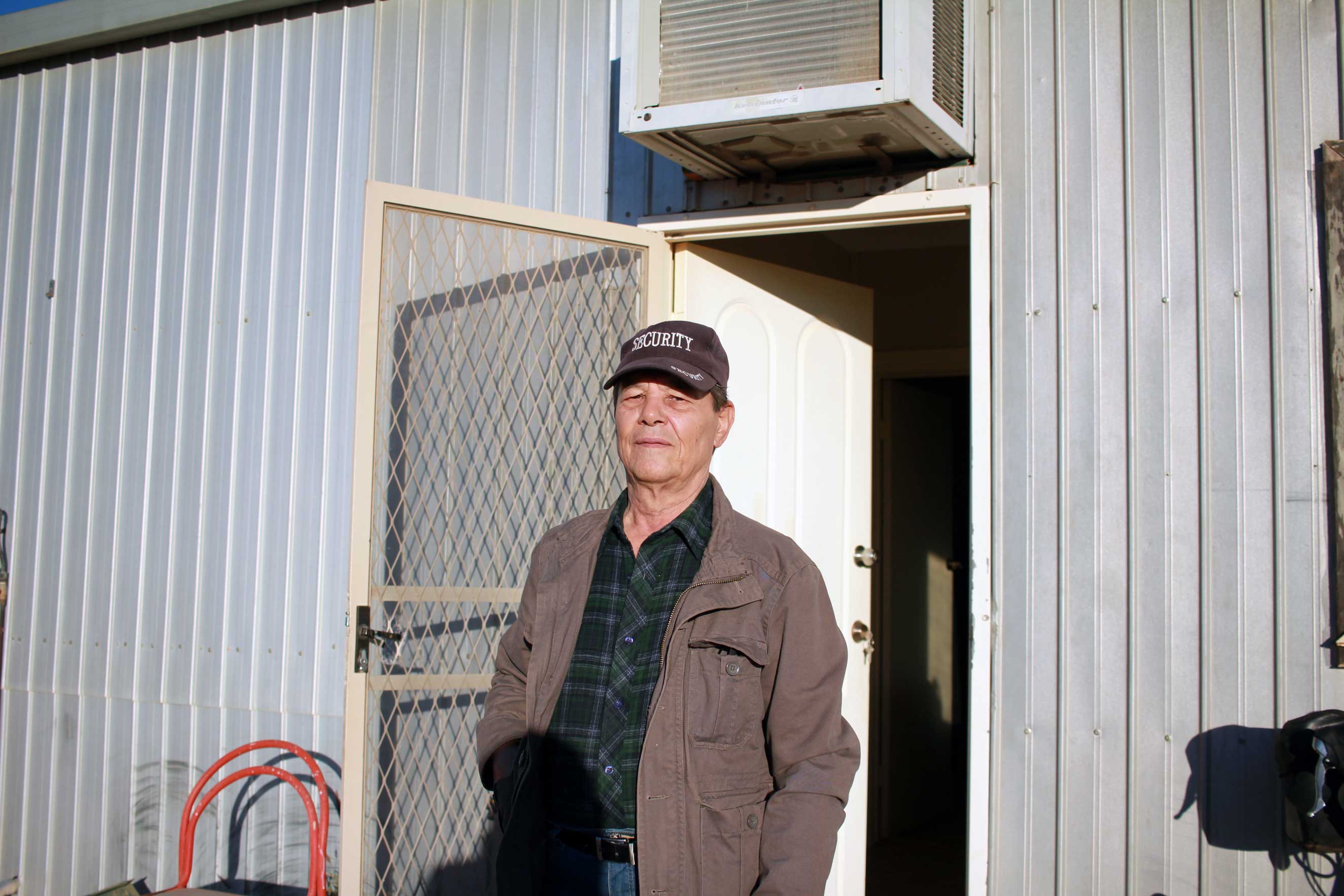 When Serif came back to the house he made us traditional Greek coffee and started to tell his history. He left gas stove on to heat up the kitchen and started to roll a huge marihuana joint. On the table there was a big bucket full of delicious olives picked up from his friend’s tree. ”Ask from whoever on the Stuart Highway, everyone knows Greek Serif”, he said. Like the van driver Bob, Serif had also come to Australia tens of years ago to look for a better life. At that time Stuart Highway was just a dirt track and Coober Pedy was a tent camp. Serif had made his living by gambling and cheating in poker. Good old days half of Australia were chasing him, he told. When he had enough cash he bought permits to mine opal in Coober Pedy. Sometimes he had found something, but sometimes nothing. Some of his friends had found enough opal to live rest of their lives without working. Serif hadn’t been that lucky, I thought, while looking at his sheet metal built house. The small kitchen was already full of marihuana smoke when Serif started to roll his fourth joint. I felt how the smoke made my muscles relax. ”They were crazy times”, he said. Gangs were watching their opal mines with machine guns and everyone was ready do to whatever for the money. Most of the people in Coober Pedy migrated there after second world war from southern and eastern Europe. The water supply system was made by Greeks, Serif added. What a legend, I thought and went to sleep on the garage floor. That night I slept better than for ages. 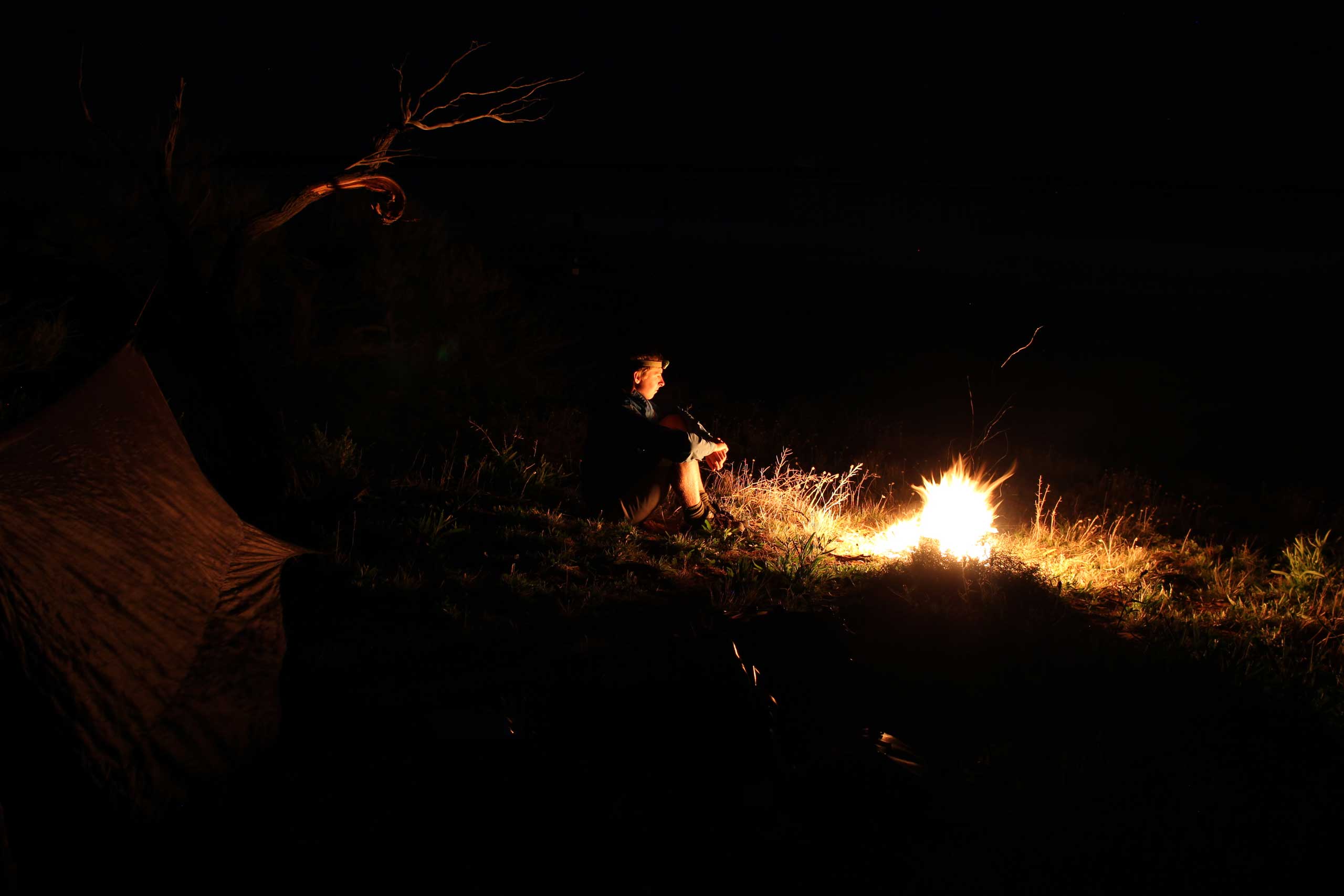 Wind was on my side when I left the town. I felt very good and was excited to reach the South coast and see the sea again. I could smell how the smell of the sea got stronger day by day while getting closer to Port Augusta. I saw lakes and sheep. Landscape started to get greener. It felt amazing after all desert! I was super happy to finally arrive Port Augusta and civilization. Stuart Highway had been a big challenge. Not the best route for cycling, but an unbelievable experience that had had a huge impact for me. I felt very confused of all emptiness I had faced and all the services that were available in Port Augusta, even though the city wasn’t very big, it felt like a real city I hadn’t seen for awhile. 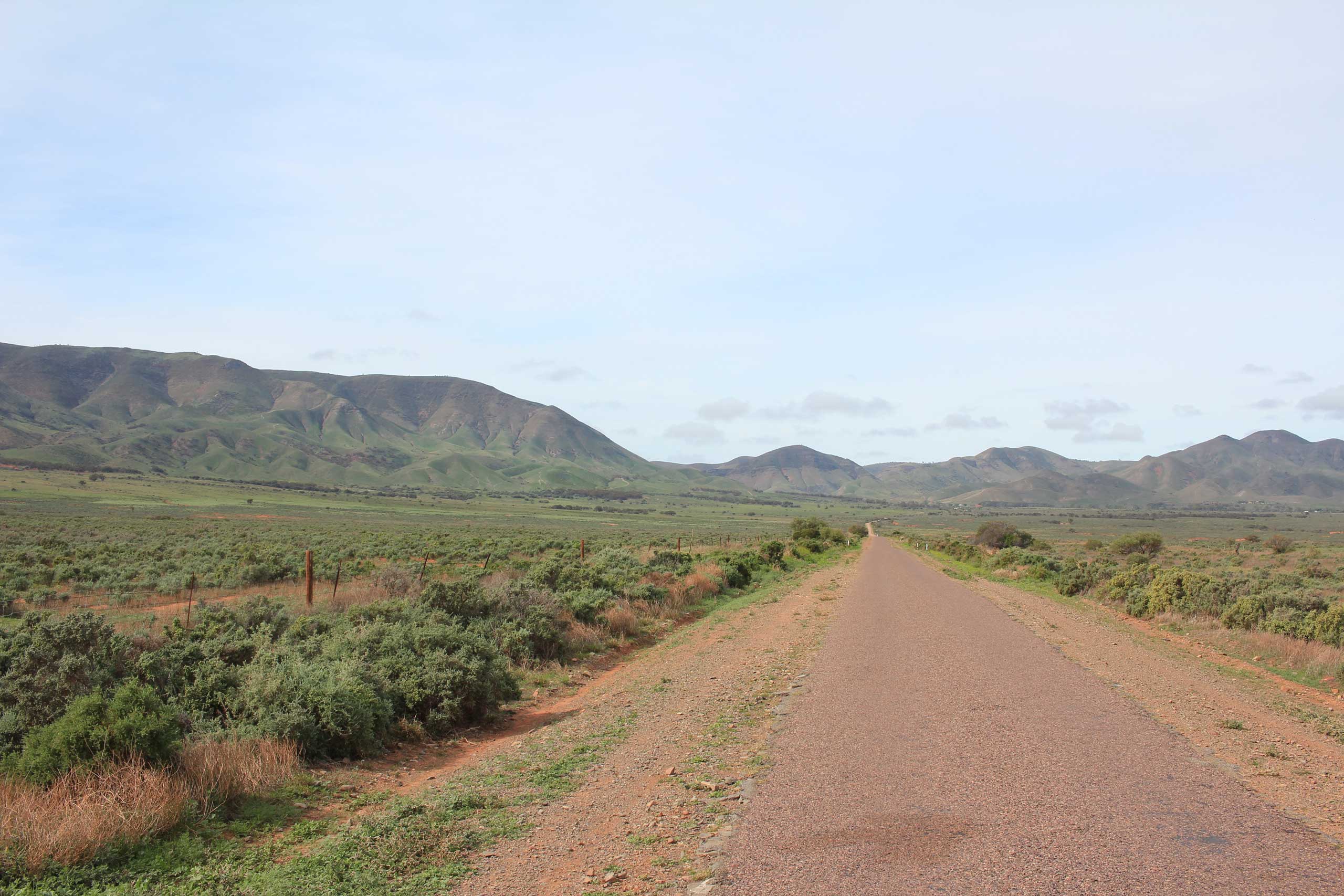 From Port Augusta I chose idyllic countryside route that at first climbed over Flinders ranges and then slowly descended to the capital of South Australia, Adelaide through many beautiful old villages. Then I flew to Finland. It was weird to be able to get back home so fast. But there I was, back at home after more than one year of traveling. Everything in Finland seemed to be exactly as they were when we left the country. In the end of summer I flew back to Australia to work and save money to continue cycling. In coming days I’ll fly to South America.