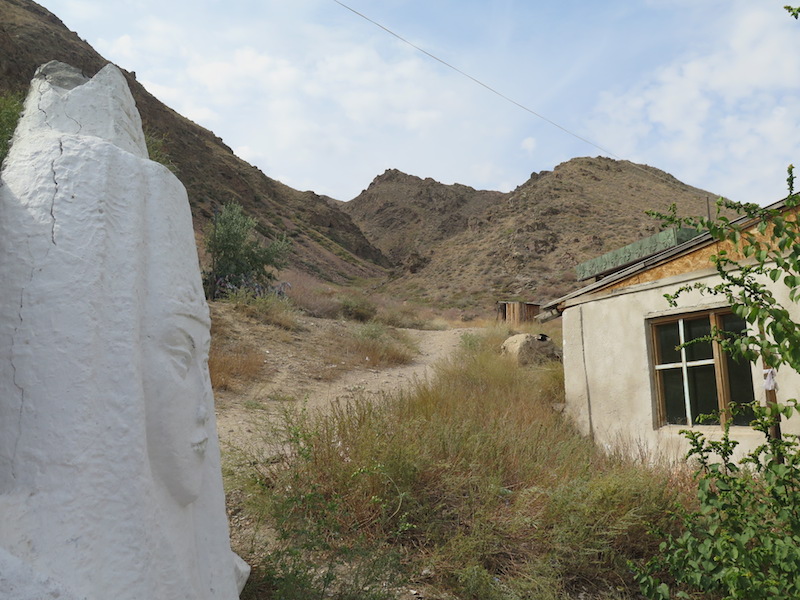 So we had had about seven week ”holiday” in Bishkek and after that the departure felt weird. We said goodbyes to the nice cleaning maid, who had become so familiar with us that she used to ask our help with maintaining the hotel condition, we ate meal at cheap cafe and started pedaling out of the city the same routes we came there. We decided to get visas back to Kazakhstan, because of the hazardous border crossings between Kyrgyzstan and China. In no time we had crossed the border back to Kazakhstan, from where we found nice place to camp next to small river, where we cooked good meal and listened to U2. 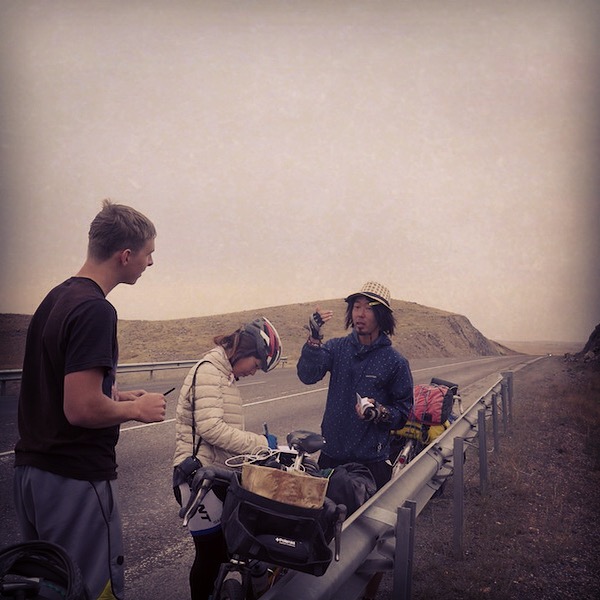 Next day started with a lot of climb. While we were pushing ourselves up the mountain we met two smiling touring cyclists from China and Japan who had fully packed bicycles. We were given good tips about camping and internet in China and we told a little about Bishkek for them where they were heading. We were little amused by their load and asked what they were carrying. They just calmly said that they carry one printer, one big bag of medicine and another big bag of electronics only. On top of that they had huge bag of food and clothes. One projector had also been on their packing list, but it had broken. After the meeting we had quite light feet, because we had fifty kilos less equipment than they had. Though the mountain uphill continued for twenty kilometers we made it quite fast and after that we were rewarded by ten kilometers long downhill. After the downhill clouds turned darker and it started raining. We decided to look for a dry place to sleep. We were offered a place to sleep from booze smelling Borat and after the police heard our needs, suddenly he had a hotel himself. The price was too high for us though and we decided to look for ourselves. We found a cool place in a tube under the road in construction site where we didn’t have to care about the weather and we just fell to sleep instantly. 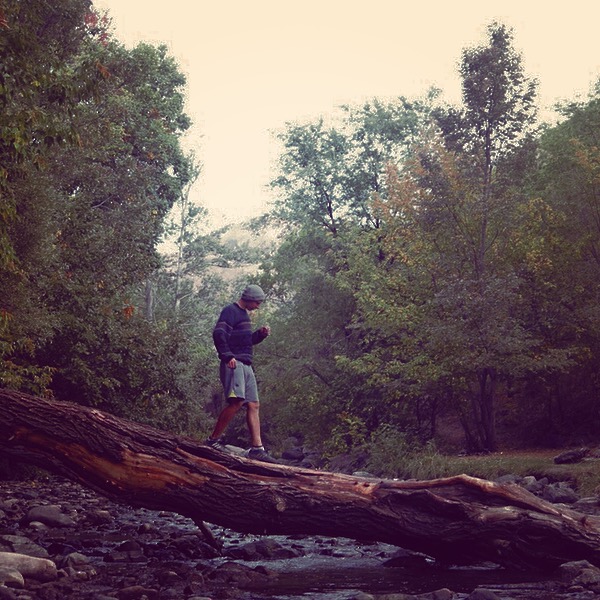 Next morning I woke up when a cop was standing beside my tent with a good posture and was wondering who the hell we were. I told him from the tent that we are Finnish tourists and we just escaped the rain for one night. I guess the guy wondered our vacation site and just gave us thumbs up and left. We had good luck because the rain had stopped and the sun was shining so we gathered our stuff and started cycling. Snowcapped mountains started to rise in front of us again while we were cycling towards Almaty, ex- capital of Kazakhstan. Almaty is no longer Kazakhstan’s capital because of earthquake danger. Couple of people asked how many days we have traveled and when we give them answer: ”Six months”, many people freeze and we just leave with nothing else to say. Mountains started to get even closer and the camping place we found was high up next to small mountain river. Antti attached his new hammock and I pitched my tent and in the evening we watched the fish swimming by. This night instead of falling a sleep to rain we fell a sleep to voices of stream. 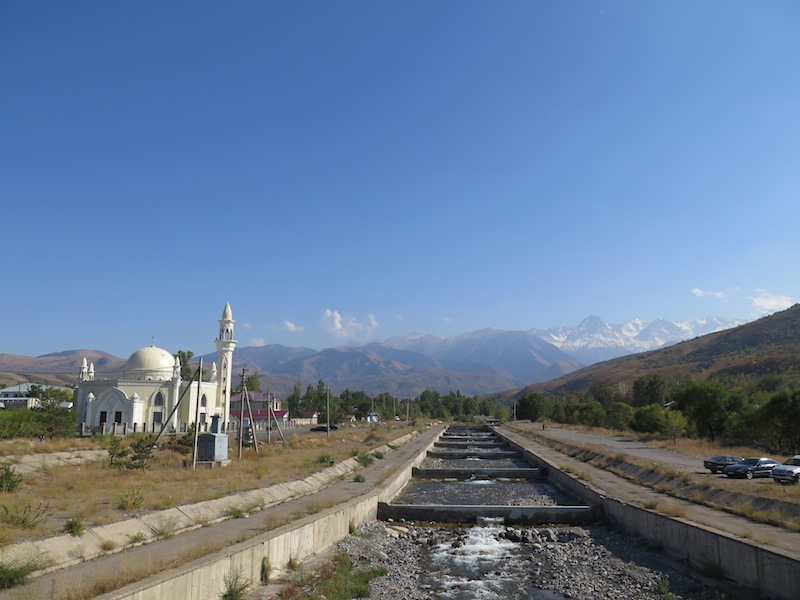 Because we had dragged ourselves up to mountains we were rewarded by nice downhill towards Almaty. The day was hot and it was seen by donkeys face when they had to pull big pile of hay and fat kazak uphill. Luckily it was easy day for us and when we arrived to Almaty we decided to find McDonalds and use some of their sweet internet. We asked bunch of people where it would be but no one knew. One guy was sure he knew but when we arrived to the place it was a HalalBurger. Eventually we found nice internet club which are quite popular here. The weather forecast said that it would rain again so we decided to get out of the town and put camp up before it. Kazak worker waved at us though and said that we could sleep in the big house behind him. From there we found bunch of aussies who were spreading the word of God and building the house or the use of FEBC radio transmitting. With side ear we heard, that they had lots of work to do, so we decided to stay for one day and help them out.

Reality hit us at the morning when our usual 10am wake up turned to 6am and soon after breakfast we were hammering yard building together. Aussies with good mood was nice company and there was work for us for sure. After putting together the yard building walls there had to be holes to dug. It was quite pain, because the ground was rock solid and the shovels weren’t the best ones. Eventually hands bruised we finished the holes and decided that we do better on the bicycle. So the next morning after blessings we headed towards China which came closer and closer. 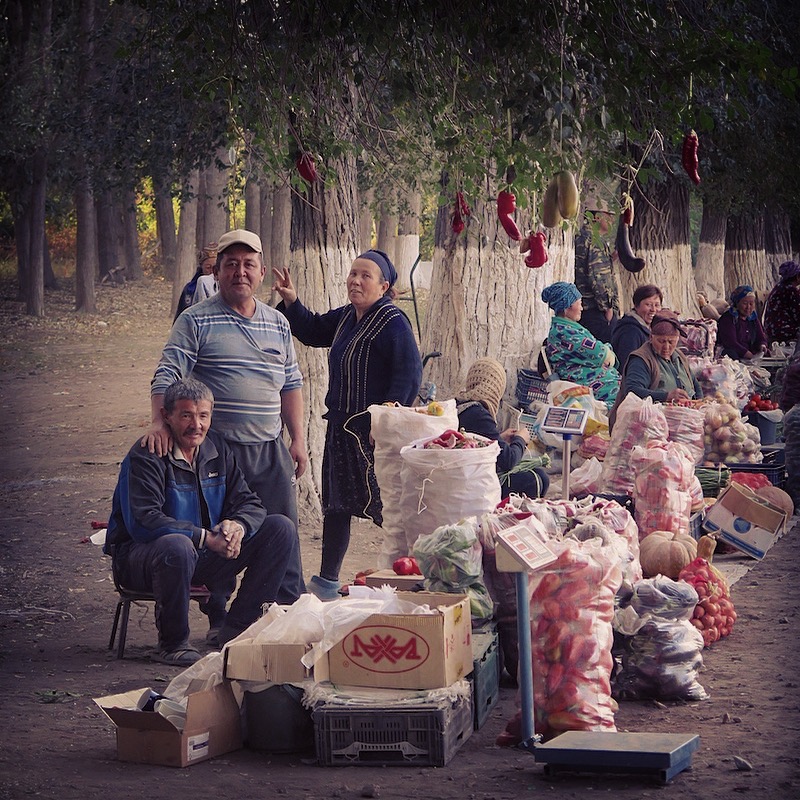 While cycling here trough villages you see lots of fruit and vegetables selling locals. Now its the best time to eat them and vegetable fields are protected well against burglars. One night we found a camping place next to apple fields and also saw dog, size of a bear, guarding, that no one crosses the gates. Well, when we went to sleep the dog had released himself and were growling right beside us. Antti was in his hammock hanging like a meal, but luckily the owner whistled the dog before any kind of accident. Another story was when we watched one farmer getting rid of cows when they were eating his corns. The cows sneaked quietly behind the guy and started to enjoy precious corn meal. You rarely see old guy like the farmer to put speed to his legs when he realized those cows stealing corn. Shovels were flying and gang of cows were running for their life. It seemed quite usual, because of the farmers confident. 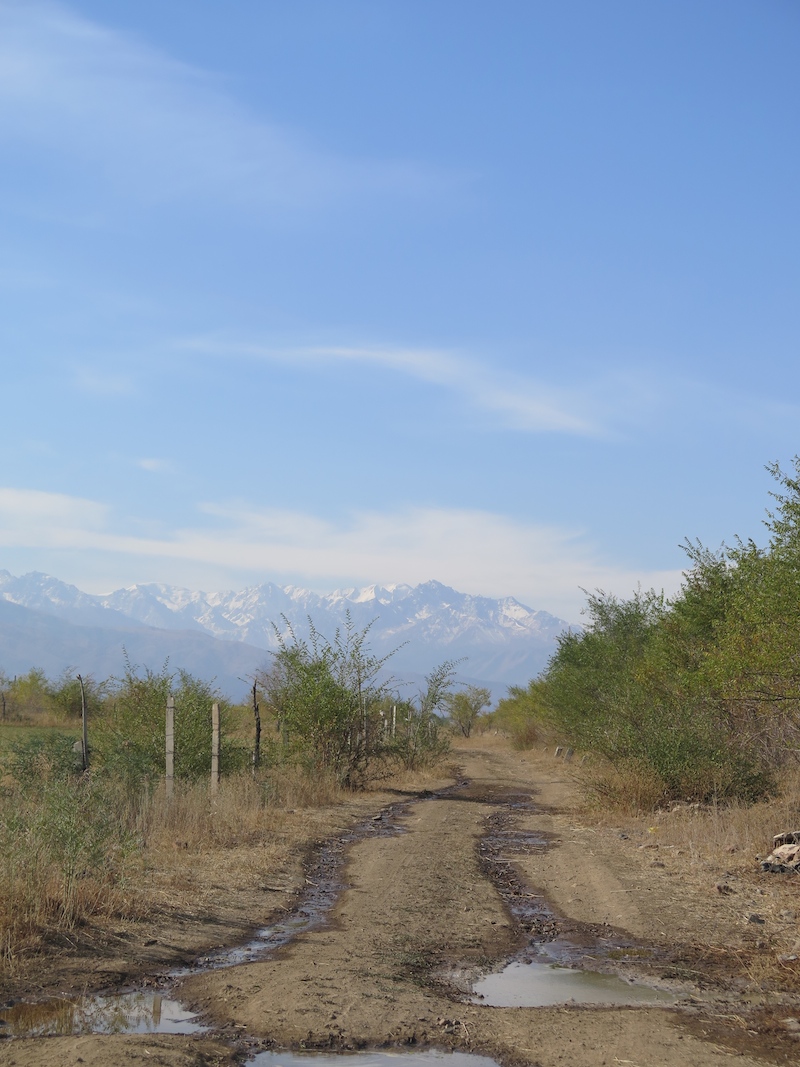 For the next hundred kilometers there were two route options. With Antti we decided to see the both by going on our separate ways and meet at the crossroad at the end of the roads next day. So we high fived each other and started pedaling alone. When I’m alone I notice that I’m talking a lot by myself. I might even do some gestures with my hands. Then I realize though that I’m coming crazy. Anyway, my route took me trough this beautiful gorge, which was also lot of hard work pushing against the wind. Antti felt it also when he was going trough 80 kilometer gravel road with no people at all expect couple of road workers. Night came and went and the next day we high fived again and the trip continued together. 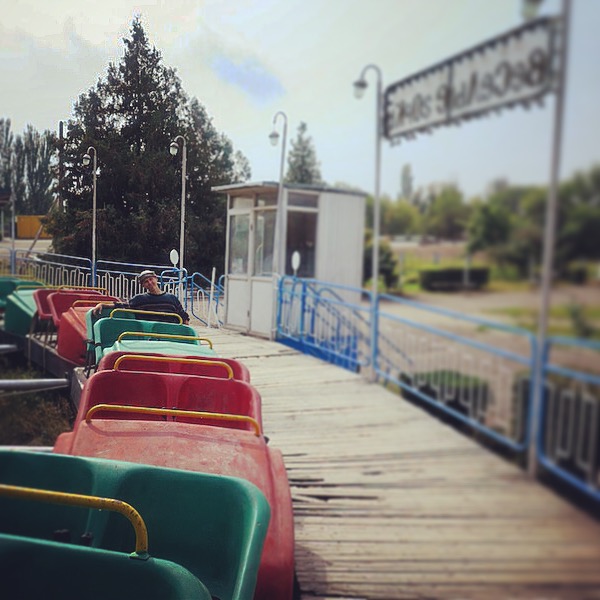 We found abandoned amusement park in the middle of nowhere.

The distance is not far from here Zharkent to China. Only 35 kilometers. We have informed that its quite impossible to cycle all the way trough China because of the visas. So we have to use buses or trains. We have been thinking that we skip the dry areas in Northwest China and enjoy our visa time in Southeast China from where we cycle towards beaches of Thailand. Next days and weeks will be very interesting because we might found ourselves anywhere during that time.